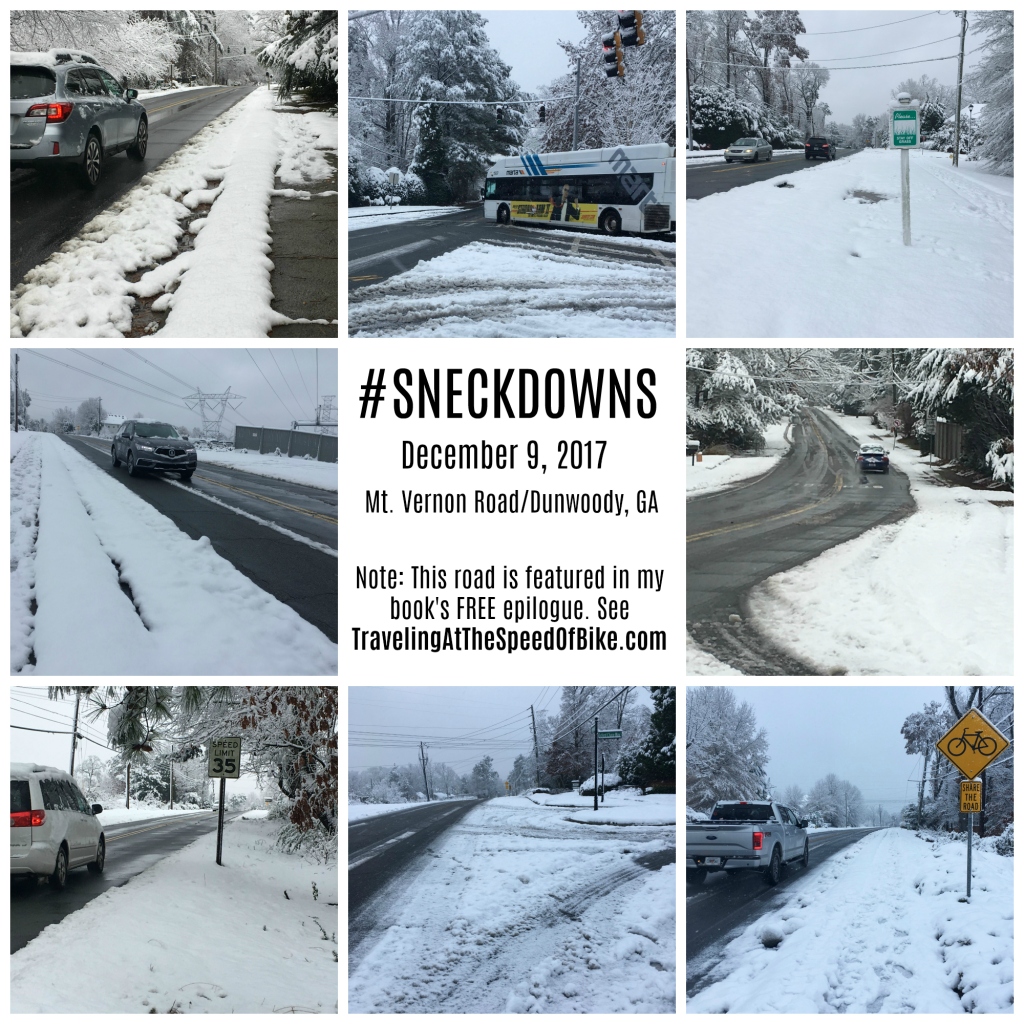 My metro-Atlanta suburb–city won’t listen to a mother when she says that roads are unsafe for the majority of its citizens to ride their bikes. Tilly Mill. Pointy the Bike Lane. I could go on (and, in fact, I do — you can read about those two examples, and lots more rubber-hits-the-road, in my book). Plus, its recently-adopted 20-year Comprehensive Transportation Plan Update does not include a connected, cohesive network that provides safe access for all (here’s the media release I’d prefer to see). (I’ve been here for the previous 20 years and lots of good has happened, so kudos for that. But there is no excuse for this oversight at this point in time.)

The road that my family (and hundreds, if not thousands, of others) can’t avoid in order to get home and to get to the train, bus, stores, City Hall, parks, schools, places of worship and employment, everywhere (and which is where The Incident occurred in the epilogue to my book — you can read it at the link here for free), is not slated to be repaved until 2021 (despite previous plans to pave it in 2016). There is no current intention to add bike lanes before then, and they will still be a battle at that point. The new NACTO guidelines for Designing for All Ages and Abilities indicate that a road with the speed and traffic profile typical to this road means that it should have protected or separated bike access.

A day with Mother Nature dropping snow on this self-proclaimed family-friendly city reveals what’s called sneckdowns, which are areas of the public space known as streets that could be used for public purposes beyond exclusive motor vehicle use, with zero negative impact on the movement of motor vehicle traffic. See my previous post about that here. Early yesterday morning, I walked a mile or so from my home on that main road (which is the part without existing bike lanes) and captured these examples of potential for a safer, more inclusive public space. Everywhere you see snow, think of it as a place where people walking or on bikes could go without mixing it up with two tons of metal (thereby reducing this city’s risk for earning its first ghost bike). Perhaps if my city hall leaders –and yours– won’t listen to a mother, they might raise an eyebrow or two at what Mother Nature is shouting out loud and clear.

Why not take a walk around where you live after a snow and capture sneckdown photos, too? Share them on social media (#sneckdowns) and let’s stop relying on folks who may not live or ride bikes in our cities to tell us where safer access is possible and needed. Let’s start listening to mothers.

Please note that having a complete network for non-motorized travel that is accessible-for-all increases a city’s resiliency in the face of many anticipated — and unanticipated — challenges, in addition to making it a more desirable and healthier place to live, work, and play.