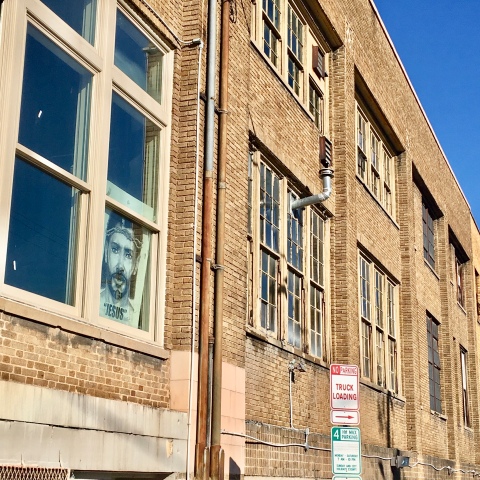 The last resort for those without a place to sleep in Atlanta used to be the Peachtree-Pine homeless shelter. You could go there if other places wouldn’t take you, for whatever reason. People have strong opinions about what worked and what didn’t work there and in the surrounding blocks, which were affected by it. Many people are happy it was closed by the City of Atlanta recently.

All I know, from traveling at the speed of bike, is that the block it occupied is empty now, except for a sign that says Jesus in the window. It’s cold out in Atlanta now, and I pass more and more folks without homes living and sleeping on the street. The MARTA train I ride is now filled with people lugging their often-overstuffed backpacks and little plastic bags of whatnots in search of warmth and safety and a place to rest their heads.

They are also trying to ride the Atlanta Streetcar again, yet are shooed off for not having a ticket (although I’ve never once been asked for my ticket). They are toe-to-toe, edge-to-edge, in a park named Hurt where it has been deemed illegal to feed them, as if they were pigeons. (Read more about A Park Named Hurt in my book.)

All I know is that something’s not right.

Takin’ another 10 days away from my blog and all social media to edit my new book #slowduckcrossing. During this pandemic, it’s requiring a ridiculous amount of headspace this time. See ya’ soon! Don’t kill each other.
Bravo (and thank u) to all who have kept this going and growing all these years. I just read the latest plan, which is being presented to city hall Monday, and it is terrific. #dunwoodyga #AtlantaRegionalCommission #greencommunity #sustainability
I see u holding firm, standing strong. Despite, despite, despite the raging current. #YouGoGirl. U r not alone.
My 85-year-old mother’s first iPhone.(my nephew’s old one)
Bubble dining in Downtown #AlpharettaGA
We’re not out of the woods yet, folks. Our #trails are getting more crowded with the warmer weather. If u need a #bike-themed #facemask for #NationalBikeMonth, see the menu on TravelingAtTheSpeedOfBike.com for link to order the #ArtsyBike face mask. I just rode 10 miles on a well-populated trail with it and it is comfortable. All proceeds help people.
Who needs vacation when u got this?! #TravelingAtTheSpeedOfBike
Just saw this! Thanks, @realtormarymorrison! Did u get some?
Cool. Almost all of them got adopted last night. #SharingGarden
It’s been quite a week.
#SharingGarden
Hilly ride today under interstates #285/#75 with the always-interesting #BetsyEggers of the #PeachtreeCreekGreenway
Yesterday the City of #DunwoodyGA did a 1-day 1-block test of a temporary pop-up protected bike lane on #dangerousbydesign Mt. Vernon Road. Please thank them for their vision! They r now considering testing a pretty planter, a local-artist-painted curb (like the picnic table project but representing neighborhoods!) and a #wavedelineator in a competitive process around the city where neighborhoods apply for this immediate safety upgrade as we enter warmer bike-riding weather during the biggest #bikeboom since the 1970s — if someone will volunteer to pursue a grant! Who’s ready to be a hero? (Side note: this week, a child riding a bike in my neighborhood was run off the road by a driver, flipped over the handlebars, and was injured. The driver did not stop. I recommended @peepslawyer @bikelaw, the lawyer/firm that represented me when I was recently hit from behind while #TravelingAtTheSpeedOfBike in #DunwoodyGA. I also suggested the addition of a #slowstreet or #sharedstreet sign.)
So I told my younger daughter, “That tree where the pig used to live is blooming,” and she knew exactly what I meant. (My older daughter was actually a penpal with that pig!) #SenseOfPlace #Home
Working on my next @peopleforbikes #RideSpot tour! Am under the deadliest highway in the USA! #i285
#ArtOfBikeRiding
This one’s for my daughters: “Momma’s goin’ to Washington.”
Putting on my “jewelry” for #BikeSummit21 #LobbyDay at the U.S. Capitol today. People all over the USA are meeting with their elected officials virtually to ask for safer streets for all. I am meeting with #SenatorWarnock and #RepresentativeMcBath.
So I rode around today with one earphone in, listening to a virtual bike tour of DC at #BikeSummit21 while passing all the blooming cherry blossoms 🌸 in #MetroAtlanta!!!!