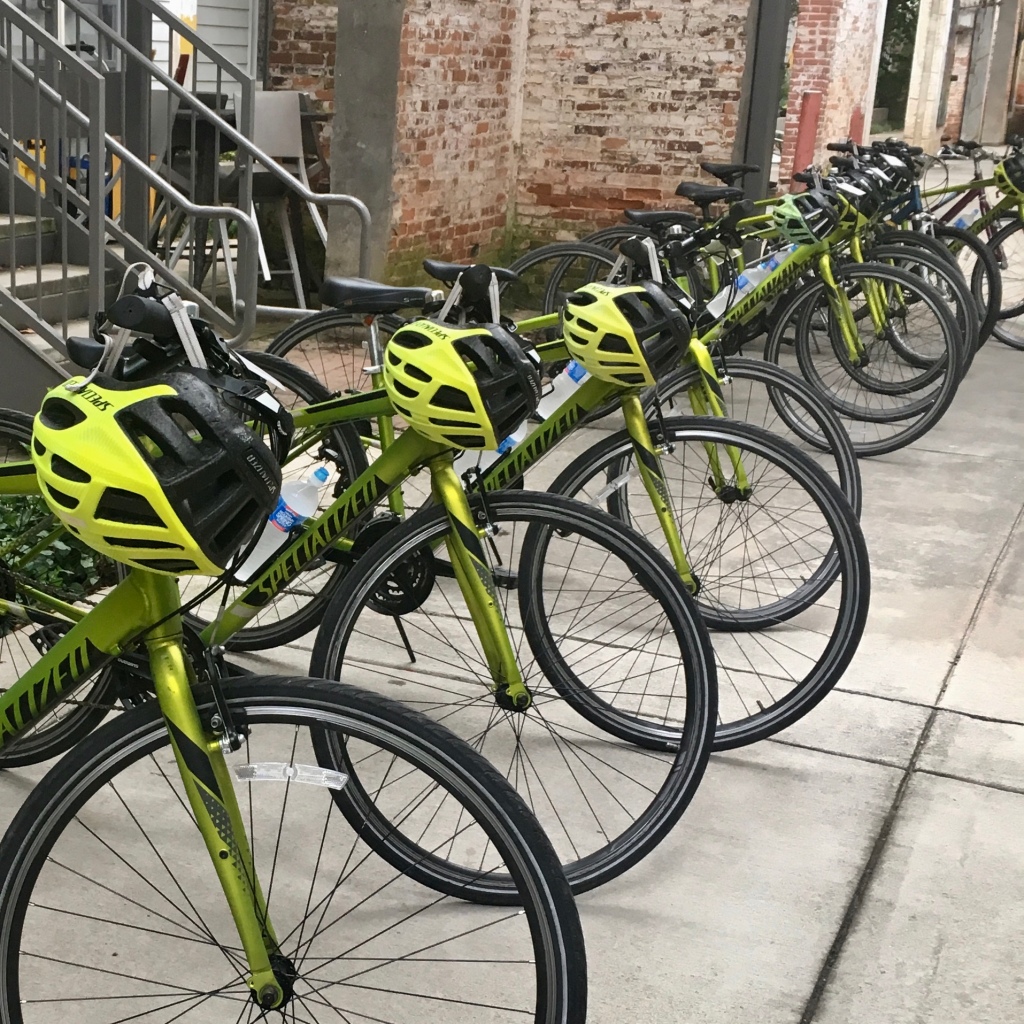 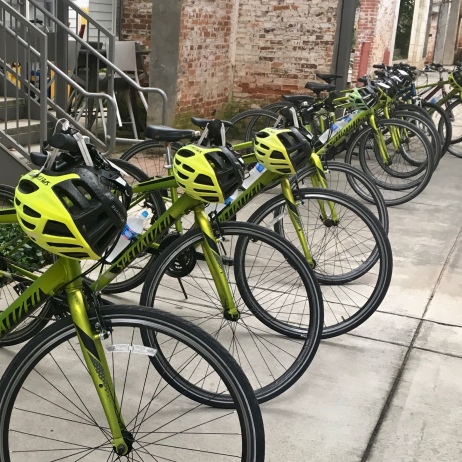 We lined up the well-maintained, comfortable, multi-geared bikes (specifically chosen to match the size of each guest) in the open-air courtyard of the old cotton-holding warehouse, which was the first brick building in Atlanta to have been fireproofed many years ago (after Sherman burned Atlanta on his March to the Sea, and after the Great Atlanta Fire of 1917 that ravaged this neighborhood of the Old Fourth Ward). It’s now work/live lofts right off the Atlanta Beltline’s Eastside Trail, and it’s where Bicycle Tours of Atlanta calls home.

Our guests arrived at 9 AM — two families for a total of four adults and five children, one as young as nine years old. After intros, a few minutes to get familiar with the bikes, and a quick overview of safety tips, we headed out onto the Atlanta Beltline; the neighborhoods of Inman Park, Cabbagetown, Grant Park, and the Old Fourth Ward; and the historic Victorian-garden-style Oakland Cemetery.

We paused by and passed tons of street art and public murals (including in the always-changing Krog Street Tunnel), and we reflected upon the ongoing relevance of the Civil Rights Movement at the Martin Luther King Center for Nonviolent Social Change (a designated National Park). We also helped support another local business (the extraordinary Revolution Doughnuts, where at least half their doughnuts are vegan, by the way); saw fun things like a Little Free Library, Tiny Doors ATL, the most surprising little jail, and backyard chickens (well, they are in a street-fronting yard at this particular home); and waved and said hello to everyone we encountered along the way.

By the three-hour-tour’s end, we hoped each guest experienced the promise of the tour’s name: Fall in Love with Atlanta. I know I fell in love again, as I do every time I’m Traveling at the Speed of Bike.

This is my question every day. About myself. About my country. About the world. If u r not asking this question, we r not in the same conversation.
Potato-planting time again! (Reminder: eyes up!) #foodformydaughters #organic #garden
Workin on my footwork. Lovin my new bellbottom leggings although they r kind of a bitch on the bike there and back lol
@ccohen33 and I r gonna go down those ramps, but I need to ease into it! #skatejourney #skatepark
Ambassador swag arrived 🚲❤️🤸‍♀️Thanks @peopleforbikes @ride_spot
Look what just arrived! Thank you @ride_spot! I love being an Ambassador and encouraging more people to ride bikes! #PeopleForBikes
Here is the bike my #pedalpowerwithpattie students use if they don’t have their own. (#freedom is the number one answer people of all ages, walks-of-life give when asked for 1 word when they think of #bikes) #peopleforbikes #bikeleague #bycs #bicyclemayor #travelingatthespeedofbike
Meet Kaysha. She learned to ride a bike for the 1st time in her life in less than 2 hours. Get free classes via text, TikTok, pdf, or in person: https://travelingatthespeedofbike.com/power/ #bycs #peopleforbikes #bikeleague #bicyclemayor #leaguecyclinginstructor #TravelingAtTheSpeedOfBike #YouGoGirl
Meghna’s 1st time ever riding a bike (in less than 2 hours). See https://travelingatthespeedofbike.com/power/ for free classes via text, TikTok, pdf, and in-person #bicyclemayor #bycs #peopleforbikes #bikeleague
I see you. I got your back. See TravelingAtTheSpeedOfBike/you-go-girl-freebies. #bicyclemayor #bycs #peopleforbikes #bikeleague #womenonbikes #equity #economicimpact #BikesMeanBusiness
#CenterJoy every single day
Just a flower and a bee.
I am so passionate about hearing people’s stories that it’s even my #guerillaart project as a #streetphotographer. See #TodaysNiceStranger and @todaysnicestranger
Small selection of other profiles I’ve been hired to write during my writing career
8 spots available for profiles during #Biketober. Snag your company/city/org’s spot! See TravelingAtTheSpeedOfBike.com for deets.
Find out why your USA city is most likely losing money 💰 to elsewhere during the #BikeBloom, and what to do about it. See TravelingAtTheSpeedOfBike.com
Places with signs like this (instead of adapting to the actual user experience with appropriate safe access) r getting so left behind 🤦‍♀️
@amothner @spruillarts
#ArtOfBikeRiding @amothner @spruillarts