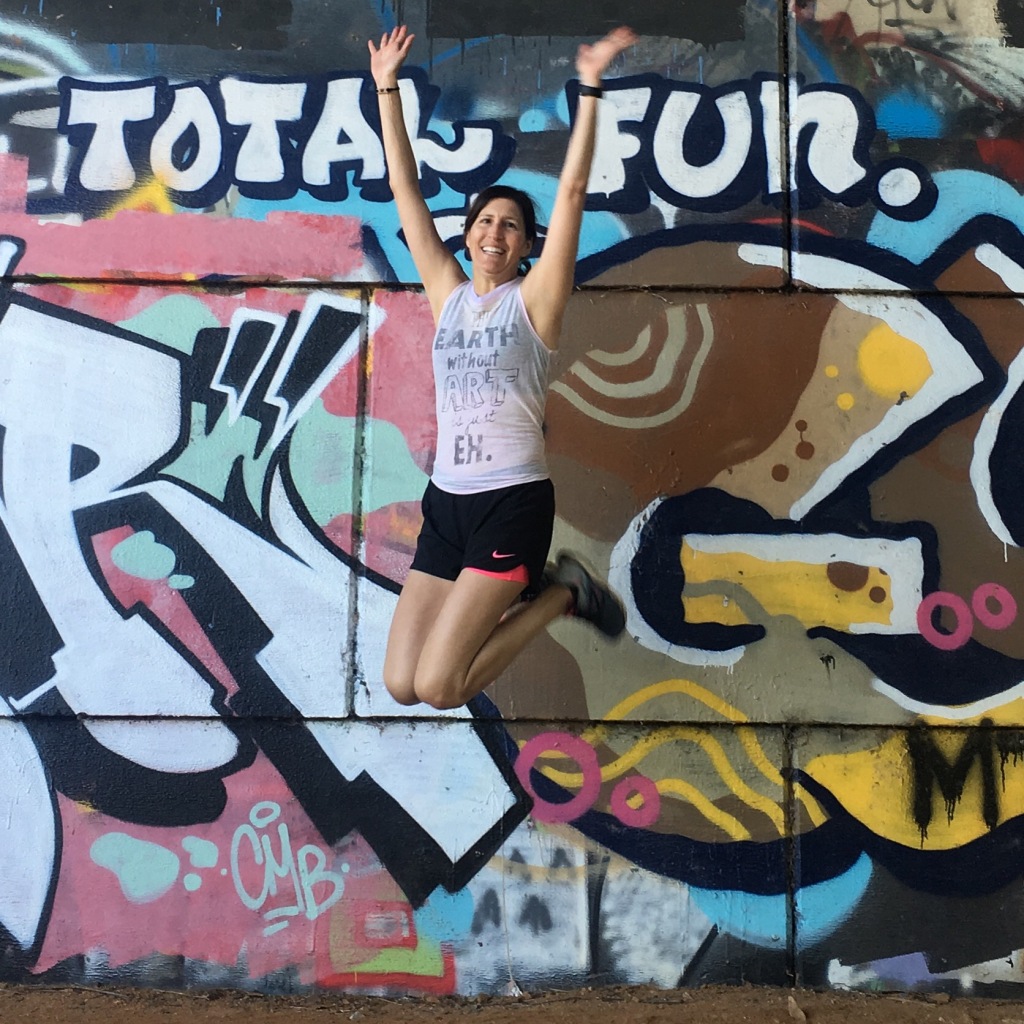 So my friend Caryn (one of my fave longtime bike-riding buddies, whom I thank in the Acknowledgements of my book) texted me two nights ago and said, “I’m off tomorrow and wanted to know if you are biking.”

The answer to that is usually yes.

I then asked what she was in the mood for. She said she didn’t have a bike rack on her car right now and that would limit the drive-to options.

I therefore suggested a 10-15 mile loop around our metro-Atlanta suburb-city of Dunwoody (which we ride together sometimes, such as when we rode bikes to vote together last November, and when we took this photo at the Everything Will Be OK mural replica recently). I’d meet her at her house on bike at 9:30 in the morning. Done.

She wrote back, “What are the other options?”

I replied, “We could put the bikes on the bus at North Peachtree by Brook Run and take the bus to the train at Chamblee into Atlanta and ride there.” A far-more complicated and time-consuming plan. But a way-more safe and interesting place for Traveling at the Speed of Bike.

She gave that the thumb’s up.

Caryn was especially excited about the bus because although we had ridden together in the City of Atlanta many times before, she had never taken her bike on a bus before*.

We ended up riding like 20 miles — through Midtown, on the Atlanta Beltline (both paved and unpaved parts in various places), through Reynoldstown, to East Atlanta Village, to Downtown (with a stop at Yehimi Cambron’s provocative mural in the shadow of the Georgia State Capitol, as part of the Off the Wall mural series that was the Super Bowl 53 Legacy Project), through Georgia Tech, and more. We ate lunch at the historic Sweet Auburn Curb Market (which is always my favorite), and she shared my boundless enthusiasm for it.

On the return-bus home, we saw a movie being filmed in Chamblee and a new mural by my friend, Kyle Brooks (aka Black Cat Tips). Note to self: return on bike to check that out!

The bus driver then dropped us off at a stop on the side of a busy road in suburbia (right next to a park and a school and a church and a senior home), and we “took the lane” back to her house (where I picked up BikeNoodle, which I had left there after riding to her house because I don’t use it in Atlanta). We were the lone bike riders for as far as the eyes could see even though the schools were letting out right around then. Caryn had definitely made the right choice for which ride to do today.

Thanks (yet again), Caryn. As usual, that was total fun.

* If interested, here are super-short videos I made a couple of years ago that show how to take a bike on a MARTA bus (or any other city’s bus that’s outfitted with this type of bike rack), train, and streetcar: