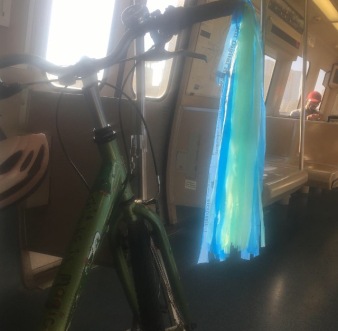 I stopped riding my bike in the streets in my “family friendly” suburb-city in metro Atlanta almost six weeks ago (for specific reasons) and I have noticed a marked increase in my happiness, even though it means I have to drive (including to the local park just two miles away) or take mass transit to ride my bike now (which I had already been doing, but now those are the only options). I hadn’t realized how much the daily dangers and micro-aggressions were wearing on me. I even let go when the local city council voted to adopt a Comprehensive Transportation Plan Update that included no mention of a safe-for-all protected or separated network in the next twenty years.

I did shake my head this morning, however, when I saw someone complaining on a social media site about a driver going almost double the speed limit on the main road by my house, which has no bike lanes. (FYI: Every five miles of motor vehicle speed increases the chances of death to a pedestrian or bike rider hit by a motor vehicle.) Then, one of the people who opposes a multiuse path on the nearby road which leads to a community center, several places of worship, several schools, and the only park in the city with a place to ride a bike, replied:

Doesn’t surprise me in the least. Happens all the time on Tilly Mill. People use the center TURN LANE to illegally pass moving cars between Cherring and Womack and vice versa, in other words, in both directions. Sure wish Dunwoody PD would regularly patrol this street and issue tickets.

She readily admits how dangerous it is. Ouch. I think I made the right decision.