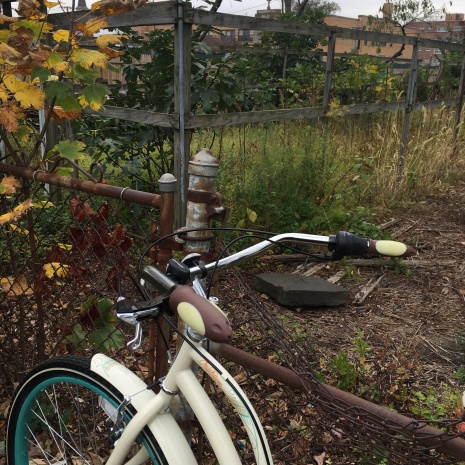 Bad things happened here. The details don’t matter. What matters is that we were all free range kids back then in the 1970s before that was even a term. And every single girl I know was either sexually assaulted or harassed in one way, shape, or form, starting at about the time she turned 10 years old. And we thought it was normal.

And so as the great unravelling of lies continues right now in society, please keep this in mind. We thought it was normal to be sexually assaulted and harassed*. We didn’t tell our parents. We didn’t even tell each other. In fact, I’m still finding out about this now-deceased man and this now-abandoned garden, where there are still figs on the tree, directly across the street from the school we attended (half of which was just demolished a few weeks ago to make way for a live/work/play development — you can see the remaining school building in the background of the photo).

We lived. We worked. We played. And we were raped and harassed — including the boys at that and other pedophilia-infected schools of faith. And we thought it was normal.

*That doesn’t mean we didn’t know that it was wrong.