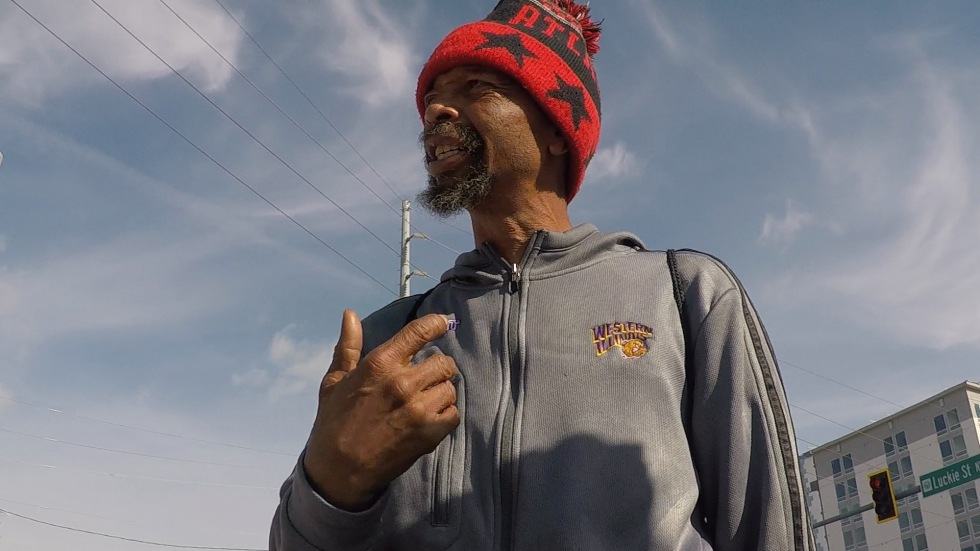 A man seemed very anxious to talk yesterday when he saw my friend and me pointing at one of the newest ghost bikes in the USA across the street from the protected bike lane where we were riding (as part of my Best of Atlanta 10-mile loop). I’ll just let him tell you what was on his mind:

A guy almost hit me the other day in this lane. He came over here and parked and said, “Hey man, I’m on the god-damn phone.” They gotta do more for the bikes, y’all.

And then they wanted to give me a ticket for being on the sidewalk with my bike. She gave it to me. I caught up with her a little while later and said, “Hey, a $25 ticket. That’s hard to pay. I don’t think I can even try to pay it.” She said, “You still got the ticket?” and she took it back.

It is very common for folks to say “Oh, just ride on the sidewalk; it’s technically illegal, but they don’t ticket you” when the infrastructure doesn’t support any other safe access. Peachtree Street in Midtown. All of Buckhead. Buford Highway. Most of the ‘burbs. No one I know, before Daniel, has ever gotten a ticket. Whole swaths of society don’t worry about it. Daniel now worries.

Daniel also told us that he got stopped by the police while riding his bike late one night. He was told he was stopped because he didn’t have a helmet. (He did not know that wearing a helmet is not required in the State of Georgia over the age of 16.) He paused and hesitated before saying it but then suggested he may have been targeted because of the color of his skin.

I have passed on information about my conversation with Daniel to those who are trying to improve the infrastructure in this spot and throughout the city. The city has expressed a commitment to bike equity and to safe access for all. My hope is that includes a seat at the table for Daniel. He lives in this neighborhood and is currently uncomfortable riding his bike. He has ideas about how to make it better. His voice matters.