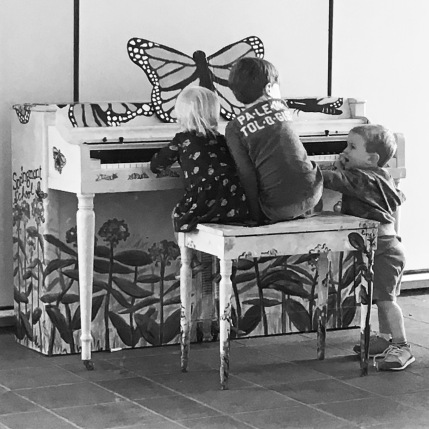 In September of this year, an organization named Pianos for Peace placed 50 local-artist-designed pianos all over metropolitan Atlanta. Additional public pianos had already been placed the year before by another organization. Many of them have now been donated to schools and nursing homes. This one remains, right outside the Woodruff Arts Center in Midtown, Atlanta. I crossed paths with public pianos often while traveling at the speed of bike and they quickly became a favorite street photography spot for me.

Interesting note — Sure, this photo is sweet, but more often than not those playing public pianos were not children but rather men who may have been homeless. I was so moved by the incredible amount of musical talent I saw out there (and the nice people that I met) that I suggested the Midtown Alliance partner with MARTA (one of the most popular, and still present, public pianos is at the Arts Center MARTA station plaza) to sponsor a public piano concert featuring (and raising money for) folks who are homeless, such as Mr. Lester. I offered to take photos of each musician and blog about their stories.

I never heard back.