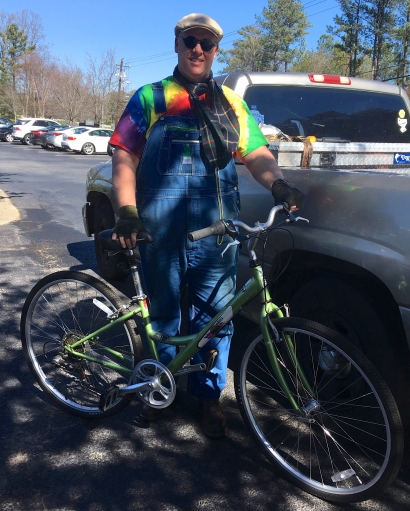 This is the second photo I took of a man named Jon, whom I met while Traveling at the Speed of Bike. He’s now a friend. In fact, he’s the person who gave me the bike I named Magic — this photo is from that day, and that story is in my book. But this following story is the one I wrote right after I first met him, if you are interested:

So a coffee shop named Cafe and Velo (co-owned by my favorite bike shop owner) just opened near what used to be a truly scary corner where I have been approached and threatened while riding my bike (while working on my A Streetcar Named Aspire longitudinal photo essay) by those perhaps lost to drugs. When it wasn’t bad, however, it was beautiful in a “junk as art” kind of way, especially when I realized that people sometimes treated like junk were filled with art. I got in the habit of carrying a few easy-access dollar bills for folks I was fortunate to meet there. That’s also where I rescued the hunks of fallen wall from a stunning mural (which I then turned into a guerrilla art exhibit).

To think I would ever stand there and talk with a stranger for what must have been close to thirty minutes without looking over my shoulder would have been unthinkable not all that long ago. Yet, there you have it. A steady stream of hipsters locked their bikes and went in and out of the new haunt, and the corner, therefore, no longer feels quite as haunted. It feels bustling with new life. Different life.

That’s where I met Big Jon, whose card identifies him as a Man About Town. Big Jon (Jon Braswell) isn’t a hipster, however. He’s a seasoned BoomXer like me, born on the cusp of two generations, a witness to many others. He spotted me through a privacy screen that separates the patio from the street as I was taking photos from across the street. At first he thought I was his hippie friend (who rides a colorful bike like my beloved Mulie), with whom he helped run a bike program years ago that fixed up old bikes (which led to a community bike cooperative named SoPo), painted them “god-awful yellow, wheels and everything” and made them available for people to use all over the City of Decatur. It was, perhaps, a precursor to today’s bikeshare program, launched this summer in the City of Atlanta. It was a seed planted.

Big Jon also served as a Church on the Street minister, where he helped what he calls “our most vulnerable neighbors.” His knowledge and compassion for those in need is deep-rooted, having grown up in a little city north of Atlanta known at the time as the “slums of Fulton County.” It used to be a summer resort town that then fell on bad times after Lake Lanier was created and drew the rich families of Buckhead elsewhere.

His father left the family when Big Jon was 10, and his mother, Ruby Dean, said, “We can either choose to be victims or we can choose to be victors. We choose to be victors.” Ninety-one-year-old Ruby Dean, who has been legally blind since she was in her 50s, has dementia now, and Big Jon considers it his great honor to care for her. The times during which he can talk are limited, however. I was lucky to share some additional time with him yesterday to get to know him better.

“We were always on the verge of poverty,” Big Jon told me. “My mama said, ‘Youngins, we may not have much, but we’ll always be clean and have manners.’ ”

The family got its clothes from a donation center, and they always had a garden. A farm stand owner down the road often gave Big Jon food, saying, “This is for Ruby Dean.”

There was a man named Red Smith who used to take the kids from Big Jon’s city down to the Morgan Falls dump in wealthy Sandy Springs.

“We’d pick out enough bike parts to make ourselves a bicycle,” he said proudly. He rode his bike everywhere, including seven miles to and from school each day.

As an adult, he rode his bike all over Atlanta, looking for abandoned houses to purchase. You name the neighborhood and he’s had (or has) a house there. As a landlord in a city on the verge of great change, he has deep concerns for the ability of people of modest means to stay in their homes and neighborhoods due to rising taxes because of the Atlanta Streetcar, Atlanta BeltLine, and more. I do, too.

I wonder where Big Jon will be called to serve next.

P.S. And by the way, here is the first photo I took of Jon, right where I met him.