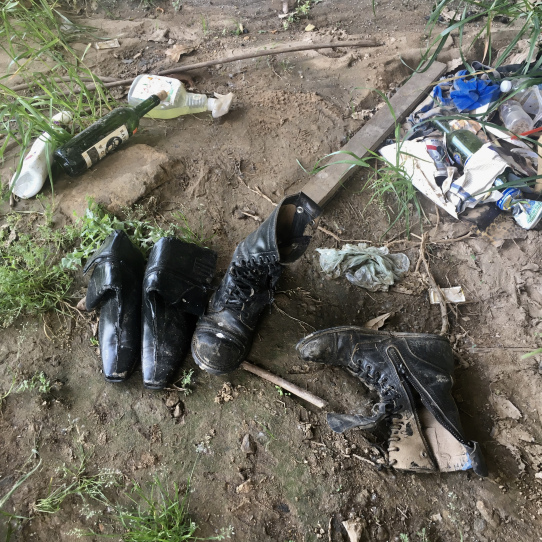 I came upon this scene while Traveling at the Speed of Bike, and had to take a photo. Had to write.

I write a lot, plus I’m an avid street photographer, and I often combine those two arts. There is actually the possibility that I’m the only person in the world producing work at the intersection of fiction and street photography (see Stranger Things Happen).

I keep a little blog named Street Shorts to play around with the marriage of photography and micro fiction. It’s a comforting habit, a “place” I can always go. Here’s what I wrote for this photo:

He laughed when he saw the two pairs of them the next day, just laying there, when he realized the shoes had a longer relationship than they did.

You may also enjoy my guerrilla art exhibits, which were temporarily displayed in found spaces. FYI, I have a new exhibit in the works. I think it’s gonna feature 100 or so of “Today’s Nice Strangers,” which are photos of people I’ve met while bike riding these past five years while my daughters and husband were all on their own very interesting journeys. Every photo in that series* has a story but I think I’ll save the stories for telling around a bonfire or over drinks with you someday. In fact, that might be nice.

*I just started an Instagram feed of those photos, called TodaysNiceStranger, if you want a sneak peek.