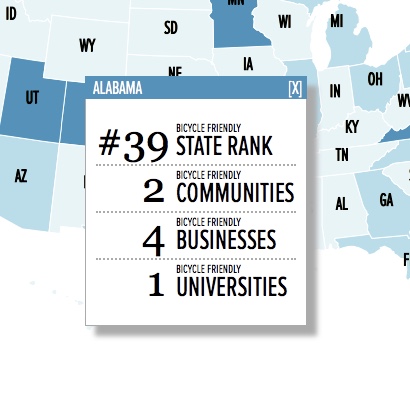 I didn’t roll my little Bike-O machine to pick the next state this time because I discovered Megabus goes from Atlanta to Birmingham and I want to try out its bikeshare there (plus tour some Civil Rights historic sites, which would be helpful in my job as a bike tour guide in Atlanta), so Alabama it is!

The initial news is dire. Alabama is 39th in the League of American Bicyclists’ listing of bike-friendly states. It has just two Bicycle Friendly Communities (Auburn and Gulf Shores, both bronze), four Bicycle Friendly Businesses, and one Bicycle Friendly University (Auburn). Additionally, it has a limited safe passing law, a mandatory side path use law (plus other potentially discriminatory, restrictive or otherwise problematic laws), and a very low number of people using bikes for transportation (which is more important to me in determining if a state is bike-friendly for women than whether or not they have women cycling clubs with fun names such as Magic City Cycling Chex and Rocket City Cycle Belles, as Alabama does).

One of the women who was in my League Cycling Instructor class was a prominent bike advocate in Montgomery, so my jury is out on that until I find out more. But Birmingham is immediately on my radar because not only does it have bikeshare but all bikeshare bikes appear to be electric pedal-assist, with a reasonable $6 day pass/$75 annual membership that gives you access to unlimited 45-minute rides.

I know one thing I won’t be doing after riding in Alabama, however (even though I’m taking the bus and train home), and that’s buying Cycles Gladiators wine, which has a label that features a painting of a naked woman flying beside a bike that was originally a poster during the Belle Epoque era used by a French bicycle company to launch the sale of its new bicycle that provided freedom to women in 1895. I won’t find it in any stores in Alabama because it has been banned there as it is considered pornographic. (You can view it here.) When we classify the female body as pornography, may I remind you that there are five penises dangling on Peachtree Street in Atlanta and no one seems to care? Hmmm. Now I wonder if I can buy Cycles Gladiator wine in Atlanta. I’ll report back . . .

I am an indie author and your support is appreciated. Proceeds from the sale of my book, Traveling at the Speed of Bike (available on Amazon in all global markets in both print and digital editions) enables me to help more women who are new or returning to bikes.