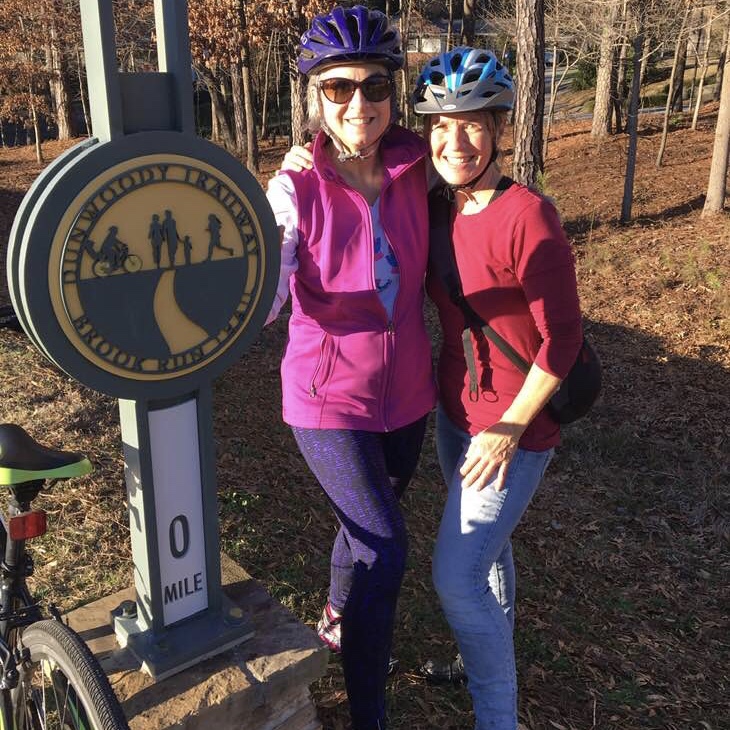 I put it out there on Facebook — an invitation for anyone to join me on Sundays in January for a completely-separated-from-motor-vehicle four-mile bike ride through the three connected parks in the metro Atlanta suburb city where I live. A woman named Kathy Manos Penn showed up two weeks in a row. She is a friend of mine because we both had books for sale at Lemonade Days (here is hers; here is mine). She also writes for the local newspaper.

Kathy  most likely won’t be able to join me the next two Sundays. Will you? Could this less-than-an-hour little ride be a weekly way for more of us to get together? (FYI, if you feel you would benefit from a bike skills class, I offer one prior to this ride. Register here.)

Meet at 4 PM at the Zero Mile marker on the multiuse trail off to the side of the playground and skate park in Brook Run Park, less than a  mile outside the Perimeter Highway in Dunwoody, GA. If you live beyond a safe bike ride away, there is car parking, plus a MARTA bus from the Chamblee train station stops right in front of the park (there is a bike rack on the bus — here is how to use it). The route is a bit hilly so bring a bike with gears. The route looks like this (see map), and our pace is leisurely.

Don’t want to ride but like the idea of getting together with old and new friends? Just come up with an idea and put it out there, too. Who knows what will happen next? Trust the journey.