The rain pelted my living room window last night as the flames in the fireplace danced in the near distance. Wrapped in a blanket I had knitted as part of my first memoir, Bucket List, I curled up with photographer Sheila Pree Bright’s stunning book 1960 Now: Photographs of Civil Rights Activists and Black Lives Matters Protests. When I got to the section featuring photos from Atlanta, I recognized some people and realized that I had been at one of those protests as well, as a street photographer. Sheila and I had crossed paths.

We crossed paths again the day before Super Bowl LIII, just blocks from where the big game was about to be played at Mercedes Benz Stadium here in Atlanta. I was on a walking tour with Amazing Atlanta Tours (the new sister company to Bicycle Tours of Atlanta, the number one outdoor activity in Atlanta, according to Trip Advisor, with more than 600 five-star reviews) with a group of CBS Super Bowl advertisers. 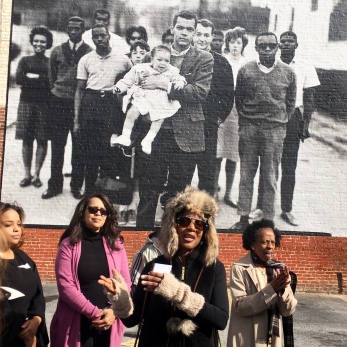 Sheila is one of eleven selected artists who participated in the Super Bowl LIII Host Committee’s legacy project, Off the Wall, which is a partnership with the City of Atlanta and the arts organization, WonderRoot*. Her project on Pryor Street (titled Mothers, March On) features two enormous photos side by side. The one on the left is a 1960s photo, by the famed photographer Richard Avedon, of Julian Bond (the communications director of the Student Nonviolent Coordinating Committee, more commonly written as SNCC and pronounced Snick) and other students on a street in Vine City, an impoverished neighborhood just west of the stadium. Julian is holding his daughter, Phyllis. On the right side of the wall (see collage below) is a recent photo that Sheila took, on a a street in Vine City as well, of mothers who lost their sons to police shootings.

When we arrived at this stop on the tour, Sheila was there, as was Phyllis (in the pink coat) and other members of the Bond family (including Julian’s son, City Councilor Michael Julian Bond, not pictured here). About five of the mothers were there as well, and both the Bond family and the mothers shared their stories with us. There were tears. There were hugs. There were connections across time and place and race.

I have been involved with the Off the Wall project since November — helping research, write, and route this new tour offering. I have had the extraordinary pleasure to volunteer on one of the murals, and to interview five of the artists. I have immersed myself at the Auburn Avenue Research Library and spent many quiet moments while Traveling at the Speed of Bike simply in awe of the murals themselves and the stories I now know are behind them. In addition to Sheila’s book (which I devoured in one sitting), I am reading several other books directly related to these murals and have fallen down endless rabbit holes of information and involvement. In short, I have taken them off the wall and into my life.

I will not be one of the tour guides for the Off the Wall tours. Owner Robyn Elliott is building a team far more expert than I am, with voices you won’t want to miss. In addition to leading the flagship Fall in Love with Atlanta bike tours, I am developing the next new tour, one focused on showcasing sustainability in the City of Atlanta, with the hopes of launching it for Earth Day this year. All the rubber-hits-the-road experiences I’ve had as part of the Off the Wall tour development team enhances my understanding of social sustainability right here in Atlanta, and you can be sure it will be referenced in this next tour.

As you travel around Atlanta, or come visit Atlanta for work or pleasure, you may see these murals (all within a mile or two of the stadium). And you may wonder about them. Why not get to the root of what’s happening up there on the walls, and take them off the wall with you as well? See the Off the Wall website here. Book your walking or bike tour with Amazing Atlanta Tours here. There’s one of each most weekends, in fact, that you won’t want to miss.

* Most of the artists created multiple murals. Check back for future posts as I continue to add photos and stories about what happens next.