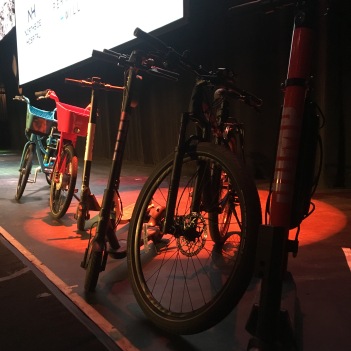 One presenter crossed the stage at the Fox Theater on an electric scooter; another on an ebike. Other presenters arrived on different scooters and bikes, and Kevin Green, the CEO of Midtown Alliance, took center stage amidst great applause on an electric skateboard. It was all very gutsy, especially when considering they were facing an early-morning dark-suited business audience that had just had coffee mere minutes before.

I loved when Kevin said that for every project undertaken by this non-profit membership organization and coalition of leading business and community leaders (in an increasingly-dense one-square-mile section of Atlanta straddling Peachtree Street), they ask, “Is it exceptional? Is it a wow? If not, what would make it a wow? And then let’s do that.”

He showed before and after photos of buildings and streets that were so exciting in their transformation that they evoked audible gasps from the audience. It’s no wonder that both business and residential growth is booming, transportation innovation is skyrocketing (hello, new protected bike lanes), and the positive changes to date seem like just the beginning. There are lots of statistics and stories to support this, and I may get around to telling you some of them in the next few days or so (or, rather, just visit this link). But first, I have to go back in time, before the presentation, and take you outside to the patio where I found the lone man.

I had hit my introvert-overload level in the Fox Theater’s ornate Egyptian Ballroom during the pre-presentation “Stand Up Breakfast”  when I decided to step outside to catch some chilly morning air and perhaps a view of the city, and there he was, in the corner. I said pretty immediately, “Ah, there’s my kind of person, hanging out in the quiet.” He laughed and introduced himself as Eddie Dill.

Turns out he’s the Director of Development for Crossroads, a nonprofit organization located in Midtown Atlanta serving those experiencing homelessness. As someone who is interested in all aspects of triple-bottom-line sustainability, including the social implications of change, I asked a few questions about how the surge in Midtown’s growth and obvious gentrification has affected his organization and the people they serve, and he shared some insights.

Snapped back to the reality of what “growth” really means to existing community,  I carried a bit of a heavy heart back into the theater for the main presentation. And then all the hoopla happened and the abundance of amenities on the drawing board came at us one after another after another (such as rooftop yoga at the new four-story Whole Foods, which will have 300 parking spots even though there are already 64,000 parking spots in Midtown), so much so that the people being displaced would have been easy to forget. But then Kevin Green talked about turning public space into pocket parks and how some people don’t want them because they could attract those who are homeless, and he said that a city is for everyone and we don’t design public space in order to exclude. Gosh, that sounded good. I may have even said wow. And then Kevin talked about a big citywide project intended to lift more people-in-need up out of homelessness this year, and how the Midtown Alliance was dedicating three staff people to the effort, and again it felt like wow.

Stay tuned. I will see if I can find out more details about that program, and maybe we can track what actually happens to those now on the edges who used to call this place home. Maybe everyone will be a winner. Maybe the transformation of Midtown Atlanta will truly be, well, exceptional.

Am on a 6-week sabbatical (until September 1). Rockin’ my #Plasket #bike basket (reclaimed ocean plastic), pitching articles, connecting with more #changeagents globally (this week included people in #Atlanta, #NewYork, #CostaRica, and #Tasmania), meeting new people #rollerskating, helping my family, and doing a listening tour in order to increase outcome efficiency this fall. Am also evaluating additional #activemobility, #sustainability, and #over50 #brandambassador requests. Hope to cross paths with you!
Look inside at TravelingAtTheSpeedOfBike.com/book #memoir #advocacy #leaguecyclinginstructor #cities #indie #author #bikeboom #bicyclingmagazine #nyt #wsj #oprahwinfrey #arnoldschwarzenegger #lebronjames #gaytalese #billcunningham #citibike
Thanks, Ron from Chicago! #TravelingAtTheSpeedOfBike
RIP, dear sir (1-year anniversary today). We r continuing your #GoodTrouble. #JohnLewis #GeorgiaStateCapitol #streetphotography
My last 2.5 weeks. Which coincided with the 1-year anniversary of surviving a #HitAndRun while #TravelingAtTheSpeedOfBike in the place I call home. This helped center #joy. #selfcare #rollerskate #RoadViolenceSurvivor #ThisIs57 #NotTodaySatan #LiveOutLoud
Today’s #LeapOfFaith. I still believe in #SlowDuckCrossing. I still believe in me.
Guess where I am?! #SlowDuckCrossing
Meet Daniel Eppstein, the latest story in an ongoing series of profiles of people making it more welcoming to ride bikes 🚲 and occupy #public space close to home and around the 🌎 🌍. See TravelingAtTheSpeedOfBike.com. @bicyclingmag @outsidemagazine @nytimes @wsj @guardian @bycs #bycs #bicyclemayor #TravelingAtTheSpeedOfBike
Nothing changes if we don’t change.
Practicing stopping (in more ways than one)
It was comin’ a toad-strangler today while I was #TravelingAtTheSpeedOfBike! Didn’t stop me from my daily #LeapOfFaith!
See TravelingAtTheSpeedOfBike.com and meet people making it more welcoming to ride #bikes and access #public space. I just added a bunch of links to bios of the amazing bike tour guides from @biketoursatl (which I was hired to write for their website). #bicyclemayor @bycs @peopleforbikes @bikeleague #bikeboom #TravelingAtTheSpeedOfBike 🚲❤️🤸‍♀️
Lol. I can only get better! (A year ago today I was contacting @peepslawyer after surviving a #hitandrun while #TravelingAtTheSpeedOfBike. Am grateful to be able to #rollerskate, and still ride my #bike, today.) #RoadViolenceSurvivor #ThisIs57
Now done. Movin’ on. #RoadViolenceSurvivor
If I interview u via phone/Slack/WhatsApp for TravelingAtTheSpeedOfBike.com (or when I get interviewed for podcasts, etc), it’s usually from here.
1st time skating at a skate park — and it’s one designed by #TonyHawk! 🤸‍♀️
Skates and bike match now ❤️🚲🤸‍♀️🎨
#public #peaches🍑 r almost ready, by the way
Also made it back to the #SharePeachtree pilot project. It’s an odd and interesting project for 3 blocks. The bulb-outs at the intersections seem to work well for pedestrians. The side lanes are weird, however. They look like bike lanes, but not really (there are bumpers at the end of each block), so people on bikes r confused by them. They are supposed to be for pedestrians, but pedestrians don’t get that intuitively and don’t use them.