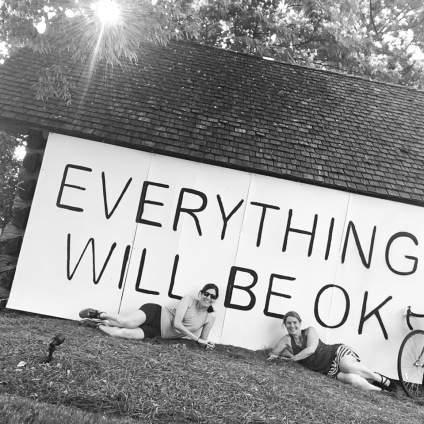 I texted my friend Caryn and asked if she wanted to ride, yet again.

And so I swung by her home and smiled when I saw that her bike was already in the driveway. We looped ten miles or so around the suburb-city where we live, where we first met when our children were little, where we sat on benches and waited for them to get out of school or ballet class or theater camp. And we chatted and laughed, and were comfortably silent for long stretches of rolling hills through a business district that would normally be filled with killing machines.

We used the self-timer on my camera to run and lie down in front of this sign. It’s a replica of an original mural that no one in this city wants to see ever be taken down because we rely on it too much as a reminder, or perhaps even an excuse to not change the things that clearly aren’t working.

We talked about maybe starting a little bike group called Everything Will Be OK, and I thought about that as we rode up a road where the bike lane ends and we were thrust into lanes with now-awake motor vehicle drivers. (Thank goodness, as usual, for BikeNoodle).

The truth, of course, is that things to me don’t seem like they’ll be ok (however optimistic I am by nature). It increasingly doesn’t seem to be like we as a society have what it takes to save the world, or at least the human species. We’re fighting too much, and about the wrong things. We’re doing too little too late. We’re not rewarding those risking their lives to model a different way forward.

But Traveling at the Speed of Bike with a friend like Caryn does make me feel like Everything Will Be OK for a moment, when we connect person to person, heart to heart, one human–paced mile at a time. And those fleeting moments matter because they keep the dying flicker of hope alive.