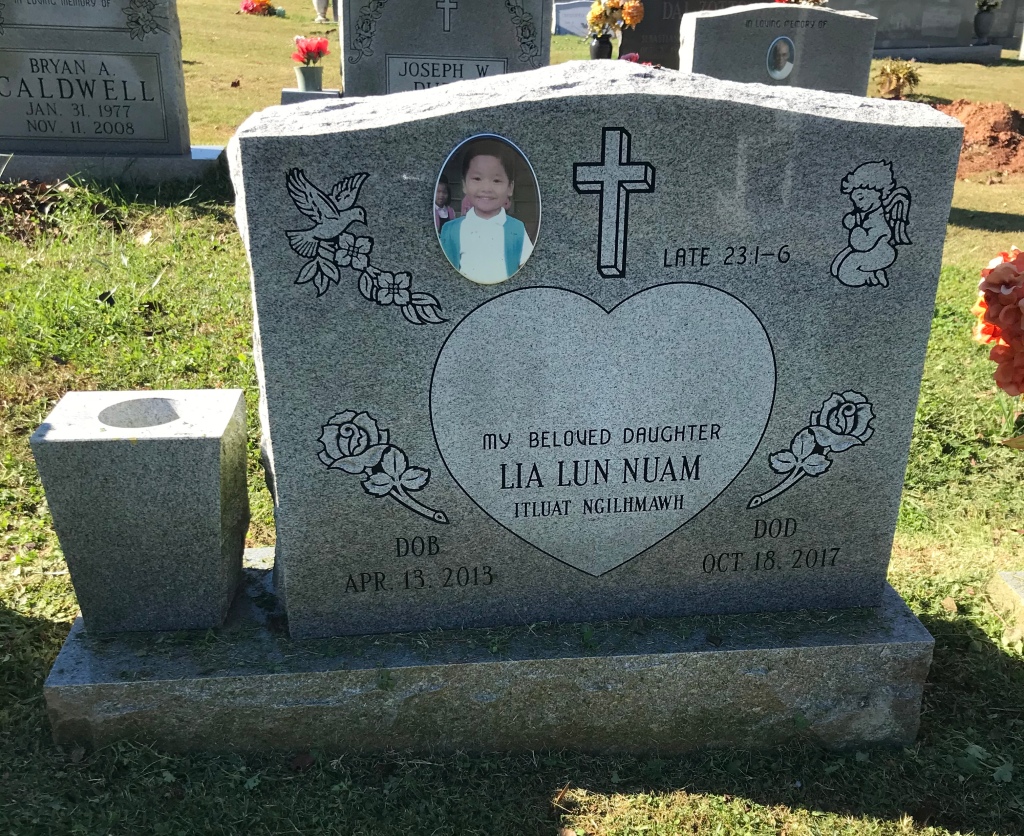 The pelotons have passed me by and I am the lone bike rider in the cemetery somewhere between Clarkston and Stone Mountain, Georgia on a sunny Saturday morning. There are fresh mounds and dying roses and vaults lined up and ready to hold the remains of those whose time has come. The names Hughes and Merritt and Livsey and Pickering give way to Meh and Koo and Kuhp and Tungdim.

Someone named Venusta Mboneanayo died in August at age 18. Vung Suan Cing, who died in April at age 34, apparently liked hot chili pepper and lime tortilla chips and Coca Cola because they are both there on the headstone. Shanhika Farrell, who died in July at 31 years old, liked Sutter white wine and candy (Starbursts, Smarties, Dum Dums, and Reese’s Peanut Butter Cups, if you want specifics). The sun shined brighter because she was here, her headstone says, and I wonder about that word shined. Is shined correct? Should it be shone? Did the family debate this as well? Did they look it up (as you perhaps are about to do)? Does it matter? Does anything matter?

A man operating a backhoe is digging another grave. Another man in a dump truck gathers up the red clay and drives it to a spot in the middle of the cemetery to dump and spread it. An enormous swath of red clay spreads like a virus with each load. I watch, and watch, and watch. A small service is ending not far from this, and a soon-to-start service is all set up, the nine seats neatly spaced. There is so much death right now.

I’m not here for any of this. I’m here for the grave of Lia Lun Nuam. I’m here to pay homage to her and her family on this World Day of Remembrance of Road Traffic Violence Victims. I’m here for the first time since I found her grave a couple of years ago while traveling at the speed of bike, when I wrote this*. I’m here because she would have been seven now.

She Would Have Turned Five

And there I stood almost interminably, my bike laying at my feet, my head in hands which were now drenched with tears.

I had wandered off the path while I was riding back to Clarkston from Stone Mountain when the wilting flowers, deflating balloons, and blanket of stuff caught my eye. As I got closer, it quickly hit me — this was the grave of the little girl who had been killed walking in a crosswalk right in front of her elementary school last fall. You may have heard about it in the newspaper or on TV. You may have forgotten about it. But there apparently had been a party of sorts here recently, with dolls and new clothes and what must have been her favorite foods. Last Friday, in fact (if my guess after seeing the date on the tombstone is correct). When she would have turned five.

I had passed the stuffed animals and flowers that comprised a memorial to her at the MARTA bus stop on the other side of the crosswalk when I first started riding my bike two times a week in Clarkston, the most diverse square mile in the USA, this past January while waiting for my younger daughter to finish one of her dual-enrollment college courses at Georgia State University’s campus there. I had written a post recently to encourage folks to ask our state legislators to approve a measure allowing speed cameras in school crosswalks, and had silently thanked God when it passed.

But today I cried. I just stood there and cried. And then I finished riding back to Clarkston, and I rode right over to that crosswalk. I got off my bike and pushed the beg button and walked when the white man told me I could walk. And then I watched as drivers sped through the crosswalk right in front of me. Did they not know that a little girl had been killed here? Did they not know that last Friday she would have turned five?