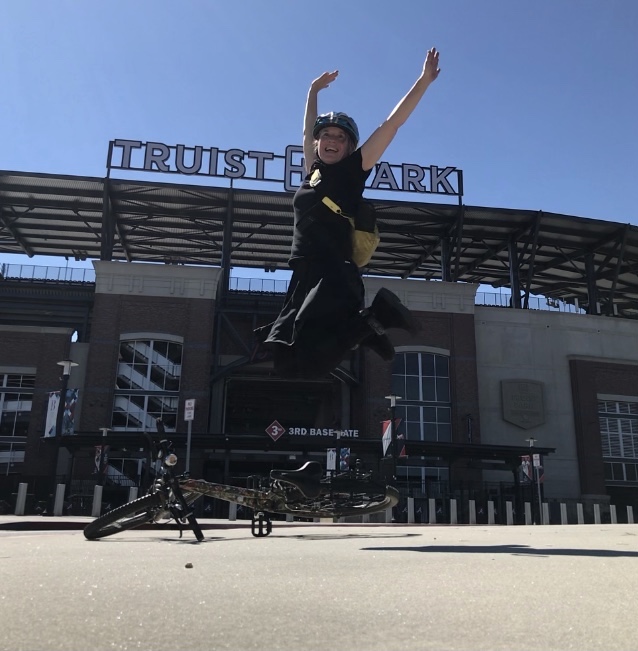 Think you need to “be brave” in order to ride your bike to see the Atlanta Braves play baseball? Well, that’s still mostly true since the new stadium is located at the convergence of two highways, including the deadliest in the USA, and the whole concept of riding a bike for transportation is new-to-non-existent in the Metro Atlanta burbs. But since parking’s a bitch and costs a fortune, don’t stick your nose up just yet.

I did find a way to create a super amazing and completely separated-from-motor-vehicle-traffic route there and back*. Sure, I needed to drive to the start, but there is a day in the (near?) future when maybe that won’t be necessary. And if Cobb County is leading the way as the only county with a multiuse path along I-285, then anything is possible (here’s the media release I’d like to see).

This 8-mile roundtrip route combines one of my very favorite places in the world (the Chattahoochee National Recreation Center greenway along the Chattahoochee River) with a douse of history and ecology, and then just plain ol’ great infrastructure on a total of five different, continuous, separated multiuse paths. (Five. Five! Whaaat? That rocks.)

Granted, this route is really only safely usable during day games (as it’s not lit, has no safety features specifically helpful to women and girls, and there is a minute under the highway that is creepy, but it passes quickly and the huge columns of future art make it worth it to me).

Note that although it’s flat while by the river, it does get hilly when you get by the highways. However, I think it’s worth trying (and is a no-brainer if you are on an electric bike) because I think you will find it stunning. Possibly even awe-inspiring. As always, feel free to walk your bike whenever and wherever that would be more comfortable for you.

By the way, I’d also recommend this route on non-game days (maybe even more so) as there’s a whole little village at that new stadium (called the Battery — check it out online) with local restaurants that are open every day, including one of my very faves that’s also at Ponce City Market on the Atlanta Beltline (hello, tofu slider from Super Pan).

This would be a great mid-week lunch ride, especially during the pandemic as you can grab your order and eat outside and feel like you’ve actually gone somewhere. Piped music! Who doesn’t love that?! (lol). Oh, and there’s great, convenient, covered bike parking with lockers and a water bottle filling station. Truth? You could even drive to the stadium and then use the bike share to tool around (although let me check that it’s usable during the pandemic). It’s like Atlantic Station came home to the burbs! What could be better! (Honestly, I’m killiin’ myself here with the humor. But for whatever reason, I actually liked it there!)

Hang tight while I add the rest of the Ride Story with details, tips, and more! In the meantime, here’s the route. See photos below. See more welcoming, self-guided bike tours in Metro Atlanta here.

*unless you dip into the most scenic coffeehouse in Metro Atlanta near the end; then you’ll be riding in the streets through a gated apartment complex. I’ll tell you how to access that later. FYI, I’m not showing you the photo of the view there because I don’t want to take away the surprise.

The human spirit is unbreakable, and an unimaginable strength is needed for the hard work ahead in our 🌎 🌍 in crisis. Consciously centering joy (in all its conundrum) has helped me reaffirm my unlimited potential during these horrific times. @CenterJoy #TrustTheJourney 🙏
#BikesMeanBusiness
Refugee market farm
Whoo, hoo! Earned another cool free patch just for traveling at the speed of bike, mostly just running errands locally! U can, too! Different patches every month, at 3 welcoming levels of riding commitment! Download the @peopleforbikes #Ridespot app and join a challenge to get in on the fun! #BikeEverywhere
Me: I should stay home on this rainy day and get some things done. Also me: But I have a poncho . . .
Plant seeds 🌱. Ride bikes 🚲. Center joy 🤸‍♀️.
UPDATE: now only 4 spots left! Only 5 spots left! Join Team Trust the Journey in the #AtlantaBikeChallenge during #Biketober for chances to win #ebikes and more. Ride at your own pace, in your own place. Every day u ride just 10 min, u qualify for chances to win! Leaderboards include those who ride with kids, those who encourage others, those who ride most days (as little as 10 min), in addition to a more usual most-miles board. We ask for commitment of just 10 min a week. We especially invite people new or newly returning to bike riding. Sign up at lovetoride.net Choose as your team Trust the Journey. 🚲❤️
🛼🤸‍♀️ #ThereWillBeADayICanNoLongerDoThisTodayIsNotThatDay #ThisIs58 #UseItOrLoseIt #aarp #shoottheduck #rollerskatingtricks #skatejourney #womenover50 #SkatesHaveInvaded #CenterJoy
Today was International #FancyWomenBikeRide, to own our presence on bikes in public space around the world. It was started by a woman in Izmir, Turkey 9 years ago. Women in 30 countries/151 cities signed up for this year. (Make that 152 because here I am!) I found out too late to organize anything, but I did need groceries lol, so I dressed up 👗 and hopped on my bike 🚲. This is my older daughter’s dress. She made it with my mother. I represent 3 generations of women in it.
See post on TravelingAtTheSpeedOfBike.com titled Clarkston. Things are changing fast. Some rubber-hits-the-road observations.
Today’s #LeapOfFaith #artofbikeriding
#ArtOfBikeRiding
Damn, that was a satisfying ride today. Reminds me why I do what I do (and it ain’t all rosy).
#PublicPlay #CenterJoy #RodeToJoy
I cleared this land less than a month ago. @rebecca_rohloff_clough and I planted it 3 weeks ago. The cover-cropped and woodchipped areas are building soil fertility. I will turn this over completely to a refuge family when my year of nurturing it is over.
(R)Ode to Joy, of course! (TikTok to come!)
This is my question every day. About myself. About my country. About the world. If u r not asking this question, we r not in the same conversation.
Potato-planting time again! (Reminder: eyes up!) #foodformydaughters #organic #garden
Workin on my footwork. Lovin my new bellbottom leggings although they r kind of a bitch on the bike there and back lol
@ccohen33 and I r gonna go down those ramps, but I need to ease into it! #skatejourney #skatepark