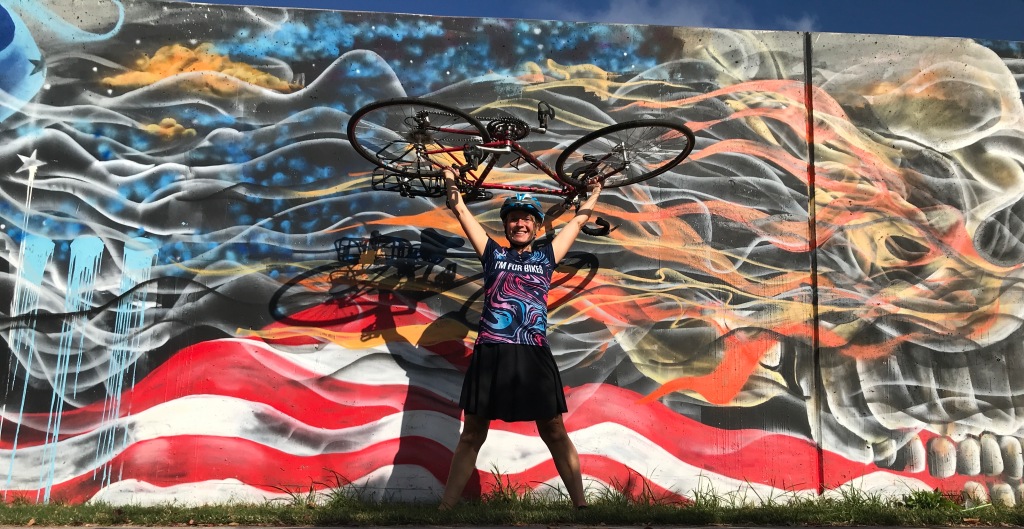 BYCS interviewed me recently about my journey to and as a Bicycle Mayor with their global consortium. This is a synopsis of the interviews. You may find something helpful in here, or ways we can align. My two-year pro bono term as one of only two current USA-based Bicycle Mayors (hi, Viv!) with BYCS ends at the end of October (and then Metro Atlanta will be off their global map). If you’ve been considering applying, now’s the time.

“Every day, I take a leap of faith* and look forward to the day when riding a bike does not require one.”

Pattie Baker, the first Bicycle Mayor of Metro Atlanta in the USA (representing 10 counties and 70 cities) shares these facts:

It is no surprise that Pattie — a Bike Native from 1970s New York, a mother of two daughters, the author of Traveling at the Speed of Bike (book and blog), a League of American Bicyclists Cycling Instructor, and a PeopleForBikes Ambassador — has made encouraging more women and girls to ride bikes her mission. Her daughters even came with her to City Hall when where they live became the newest city in the USA in 2008 and Pattie founded and was appointed to lead the city’s Sustainability Commission. Plus, she was appointed to serve on the city’s first Comprehensive Land Use Plan’s steering committee.

Her daughters are now grown. Pattie rides her bike as transportation almost everywhere. In July 2020, she became the first survivor of a motor vehicle driver charged with a Vulnerable Road User Ordinance violation in the southeastern USA when she got hit by a person driving a 4,500-pound SUV (this account of it is her most-viewed blog post of all time –now two years later, that road unfortunately continues to be dangerous-by-design). After recovering, she decided to apply to become a Bicycle Mayor. She wanted to focus on positive forward movement (and had already, in fact, written a series of profiles, titled the You Go, Girl series published on her blog as part of her healing that showcased women making it more welcoming to ride bikes).

In her application for Bicycle Mayor, she included a dozen letters of recommendation from multiple city councilors throughout Metro Atlanta, other civic and business leaders, and yes, even the lawyer who successfully defended her case. She chose as her three objectives as Bicycle Mayor: (1) Shine a light on those making it more welcoming for people on bikes; (2) Empower or assist more people, especially women and teen girls, to ride bikes; (3) Encourage people to apply to become Bicycle Mayors of their cities or counties.

Early in the pandemic, Pattie became the first person in the world to offer her bike class via text through the platform Arist. Condensed from the League of American Bicyclists’ Smart Cycling course and enhanced with additional lived and learned expertise specific to women and girls, this course (called Pedal Power with Pattie’s Basic Bike Skills Class) continues to also be available for free via downloadable PDF. Pattie then became the first bike educator in the world to use TikTok as a delivery platform for instruction on a dedicated feed titled PedalPowerWithPattie. (She also created a PDF with Seniors-on-Trikes Recommendations, after teaching that class for a year, that has been downloaded thousands of times all over the world.)

As the pandemic progressed and as part of her Bicycle Mayor goals, she followed that up with a second even-more-basic class titled Pedal Power with Pattie’s Learn to Balance and Pedal Class. Thousands of people have taken these classes, in addition to the one free class she offers in person each month thanks to proceeds from sales of her book. Here was her one-year Executive Summary as Metro Atlanta Bicycle Mayor, with links to some of these assets. Also see the Pedal Power with Pattie website.

Her shift now completely global, Pattie created a brand of upcycled bike tube earrings on plantable packaging which she named BikeBloom. The fun, fashionable and surprisingly light earrings are handcrafted from parts rescued from bike shops, including REI. She is currently offering them for free when you donate $125US to Global Spokes, which provides bikes, helmets, locks and lights to refugees-of-war in the most diverse square mile in the USA. (Fun fact: You can often find Pattie in that city, named Clarkston, since she also created and stewards a Sharing Garden at a community garden for refugees there.) An Etsy shop named BikeBloom features a wide range of styles, colors, and combos in both two-abreast and single track options.

“It’s not about the earrings, of course,” Pattie told us. “It’s another way for people to imagine what’s possible, and to find innovative ways to move toward making that happen.” As with Pattie’s book, all proceeds from BikeBloom earring purchases are used to help more women and girls ride bikes.

Pattie’s motto is Trust the Journey. Her unique journey is a great reminder that we all have our own way of making a difference. As Pattie shared in closing:

“Simply existing on a bike in public space in many of our dangerous-by-design cities, including where I currently live, is a radical act for a woman or girl. I know that my only job as a person on a bike is to arrive home alive. That became very clear to me that day on Tilly Mill Road in Dunwoody, Georgia, USA. Someday my husband will say to me Have fun instead of Be Careful when I leave my home on a bicycle. That day is not yet here. And so I continue.”

Note: There’s also a free throw-back BikeBloom playlist so you can rock your 1970s-inspired boho jewelry.

Plus, a micro-enterprise training module to make upcycled bike waste earrings is in the works for women-owned-cooperatives around the world. Follow SpeedOfBike on TikTok and view the #BikeBloom hashtag there for lots of fun peeks at the process.