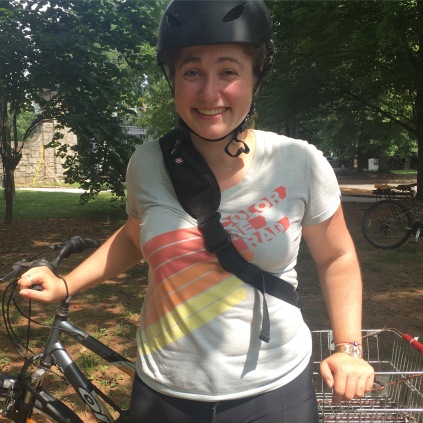 Meet Viv. She was my student today for my 2nd-to-last free “Pedal Power with Pattie” Basic Bike Skills Class for Women. As our time to start passed, I thought she was gonna be a no-show but then she messaged that she was running late. Turns out she rode her bike over an hour to come to the class! She clearly has some mad bike skills, which became even more apparent when she shared her story with me, which includes having been a bike commuter in both Montreal, Canada and Melbourne, Australia. However, Viv had gotten hit by a truck about four years ago and has felt hesitant on bike ever since. Originally from Ontario (she grew up “in the country”), she moved to Atlanta about a year ago and has been surprised with how bike-friendly it seems and wants to give it a real go. So we brushed up some old skills, put some new tips and tricks in her “tool box” to help her avoid future crashes and really worked on her owning her intention out there. Bottom line? I think we’ll be seeing lots of Viv around Atlanta.