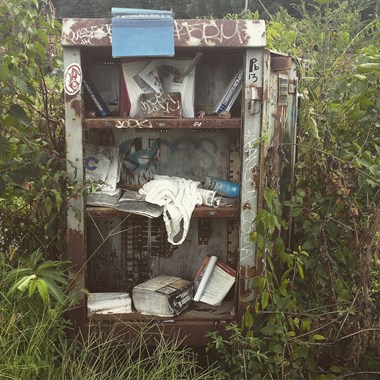 Cast-off detritus from a night where good turned bad, perhaps, The White Dress lay on a pile of wood chips in an abandoned urban garden until I found it accidentally.
I carried its unknown story around the city while Traveling at the Speed of Bike and tossed it recklessly into existing unloved tableaus of reality. The White Dress series of photos somehow honor the woman (or man) who was, and a city currently facing the pain and pride of change.
In this photo, I came upon an abandoned bookcase in a field of golden weeds alongside a soon-to-be-paved path that is part of the Atlanta BeltLine. Books askew, it somehow seemed one with the place, as if it belonged, as if we all did.
If interested, you can see my Flickr album of the entire White Dress series here. Here are brief summaries of my other guerrilla art projects.