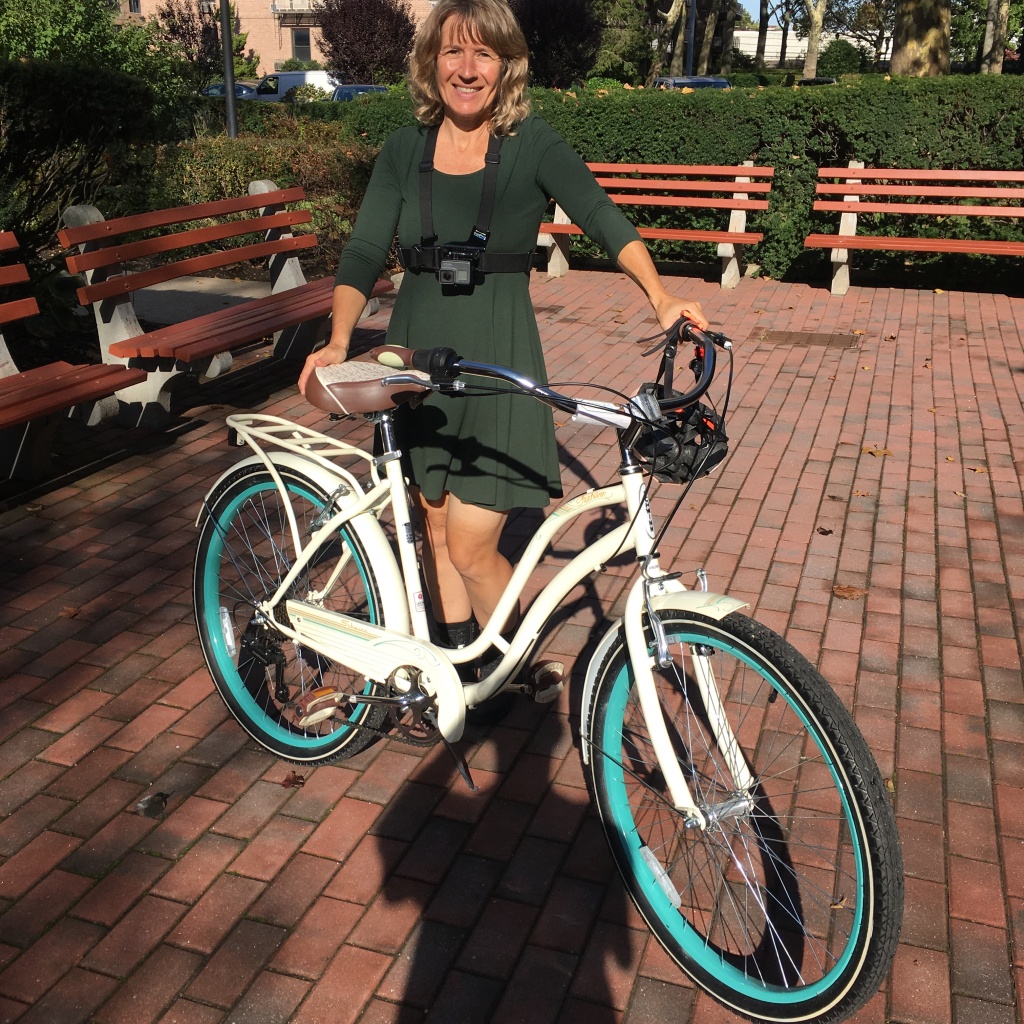 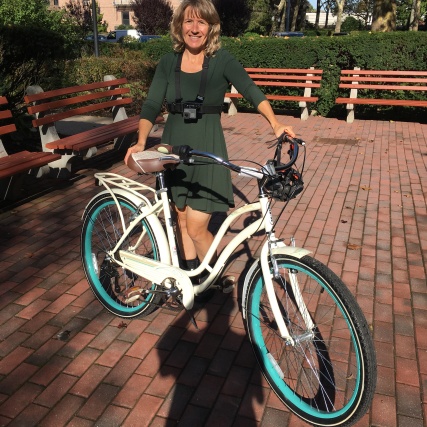 This is the full version of the photo that’s on the cover of my book, Traveling at the Speed of Bike. My 85-year-old dad took it (that’s his shadow) when I came back to the place where I grew up (Mineola, NY) to ride around on a bike I bought that day (which I named Schwinneola) to tickle memory alive for the book’s Epilogue. Every time I left my dad to go ride over several days, he’d say, “Be careful.” In fact, every time I leave anyone, that’s what they say. I look forward to the day when the places we live have such safe access-for-all that folks say, “Have fun!” That day is coming.

In the meantime, I wear a body camera, sometimes on my handlebars but most often in this thing that’s actually called a Chesty (not my cute nickname for it, such as when I call the Atlanta Streetcar “Streety” and the Atlanta Beltline “Belty”). I told my husband that if anything were to happen to me (which is code for “killed by motor vehicle violence”), to check my body camera because I try to always follow the letter-of-the-law (exceptions include if I feel endangered by an imminent attack, or the infrastructure simply does not allow me to travel legally). Turns out I also love using the footage for advocacy and education purposes. As women’s concerns are traditionally discounted, the video footage gives me clear-cut evidence of the challenges people face in our shared public spaces known as streets. If interested, here’s my YouTube channel. (Please note YouTube degrades the video quality — it actually looks significantly better and can be used for other purposes in its original much-higher quality.)

My body camera is the GoPro Hero 5*. It is sturdy, waterproof, and easy to use. I usually just run it on the video function (although the time-lapse function has its place), from which I can also easily grab screenshots on the Quik editing program that comes with it (link to View from the Handlebars on my Bonus Resources page). I never use the voice commands since I ride in urban environments and that would just be weird, but you may enjoy them (especially if you ride mostly recreationally on paths and like wearing the camera on a mount on your helmet). This one has functionalities that I haven’t come close to learning yet, so I personally would see no use for a newer model. I paid something like $400US a few years ago for mine, so to see this now available in the high 200s screams deal to me. I know there are GoPro knockoffs out there, but I was not happy with what I was finding in the reviews and didn’t want to have to throw more money at this tool if a cheaper option didn’t work. Click the photo below to find out more about, and purchase, the GoPro body camera I bought, use, and love:

Click the photo below to find our more about, and purchase, Chesty:

I got extra rechargeable batteries so I could go the distance when I’m out for a few hours (I switch them out when I stop to support local businesses, as bike riders do more often than those in cars, thereby recirculating more money into the local economy). Click the photo below to find out more about, and purchase, the ones I bought, use and love:

And by the way, anecdotal evidence here — it seems to me that as a woman wearing a body camera, I feel safer in situations that have the potential to lead to assault or harassment (which, unfortunately, is many situations, I guess). I think people associate the body camera with police and that’s not a bad thing when you’re out there Traveling at the Speed of Bike.

Tap in every day this month for posts about every product in my “Pedal Power with Pattie”-Approved Shop. Hope to see you out and about!

* Tip: mount it upside down so that it hinges upward when riding. I learned this tip from a cool Surfer Dude on YouTube.