So, as a mother of two daughters and an advocate for girls and women close to home and around the world, my red flag flew up when I heard the framing of this story by a local television station about an assault of a teenage girl in a Hobby Lobby craft store in the suburb-city where I live.

Although the girl in this story is given kudos for her swift response and the police are taking action, the fear-focused suggestion (by both the police sergeant and the newscaster) that parents must keep their children close by at all times (in a story about a 13-year-old, not a 5-year-old) is just plain wrong*.

No worries. I rode by the strip mall yesterday where the store is located beyond the sprawling Walmart-anchored parking lot, sandwiched between a Japanese steak house and a bottle shop, in order to take some photos. (Yes, this is the same parking lot that has the first bikeshare station in the City of Dunwoody, pictured here, although there is not one bike rack anywhere for those riding their own bikes.) And then I fixed the story by creating this media release (and framing of the story) that I would have preferred to see. (Please note that the quotes are aspirational and were not actually said by the people to whom they are attributed. However, the facts in the story are real, or could easily be so in the case of the expanded presence for the Bike Patrol.)

TEENAGE GIRL SAVES HERSELF FROM ATTACKER IN SUBURBAN HOBBY LOBBY

A thirteen-year-old girl who was browsing in an aisle of the craft superstore Hobby Lobby in the metro-Atlanta suburb-city of Dunwoody, Georgia was assaulted by an unknown man on Saturday, October 5, 2019. She shouted to alert the person with whom she was shopping (who, in this case, was her mother), who was just inches away. The attacker ran out of the store before the local police department could be called. Sergeant Robert Parsons from the Dunwoody Police Department arrived shortly after 911 was called and took the victim’s statement. Video from the store shows the suspect, and a warrant for his arrest has been issued.

“This girl did everything right, and I applaud her fast action to avert the attacker,” said Sergeant Parsons.

Dunwoody Police Chief Billy Grogan, when asked about this attack, added, “We are deeply concerned about this crime, first of all, for any trauma it may have caused this girl and for any future attack this suspect might make. It is therefore our highest priority to arrest him. Additionally, this incident, if handled irresponsibly by the media, could send a message that vulnerable populations such as teenage girls are not safe in our community, or that parents have a constant responsibility to escort and shelter children who are, rather, developmentally ready for increased independence. In any written or verbal description of events, we discourage the use of the word “groping” because it is a euphemism that downplays and disregards the severity of the crime. The correct term is assault. I want to counter possible framing of this story with this very clear message: Harassment and assault of any person simply will not be tolerated in the City of Dunwoody, and people of all ages, genders, and abilities should expect safe access.”

This statement is in line with other messages the City of Dunwoody has recently sent in support of its commitment to being a diverse, family-friendly city where everyone has safe, easy, and equitable access to all aspects of the community. It joined other metro-Atlanta cities in passing a Nondiscrimination Ordinance earlier this year and is currently on track to be the first city in the southeastern United States to pass a Vulnerable Road User Ordinance. It also offers live online viewing of all City Council meetings so the possible hardship of physically attending is not a deterrent to active civic participation.

Chief Grogan continued, “For anyone with concerns about your personal safety or your teenagers’ unfettered access to our community, we encourage increased personal empowerment through our free, regularly-offered Stranger Danger and Self-Defense classes. We are also increasing our deployment of our recently-expanded Bicycle Patrol to create a greater presence in our business districts as a visible deterrent and quick-response to crimes of all types.”

City of Dunwoody Mayor Denny Shortal added, “We are well aware that teenage girls, in particular, are severely underrepresented in public spaces throughout the USA due to perceived and proven safety issues, and that children, in general, do not enjoy the kinds of autonomy and freedom of movement — such as being able to walk and bike to school without parents and to run small errands close to home — with which many of us grew up and which contributed to our independence and skill development. We are working diligently to change that here in the City of Dunwoody and have zero tolerance for assaults such as what this girl experienced. I offer my deepest concerns for her welfare and my sincere hope that our nationally-esteemed police department will swiftly remove this person as a danger to our tight-knit community.”

The City of Dunwoody is a northern suburb of Atlanta that became the newest city in the United States on December 1, 2008. It has a population of about 48,000 residents, but its total number of people expands to over 100,000 during the traditional work week as it shares the largest concentration of Fortune 500 headquarters in the southeastern United States with its neighboring city, Sandy Springs.

Hobby Lobby Stores, Inc., formerly called Hobby Lobby Creative Centers, is a private for-profit corporation which owns a chain of American arts and crafts stores that are managed by corporate employees. The company is based in Oklahoma City. It was most prominently in the news several years ago due to a Supreme Court case. In Burwell vs Hobby Lobby (2014). the Supreme Court held that, as applied to closely held corporations, the regulations promulgated by the Department of Health and Human Services requiring employers to provide their female employees with no-cost access to contraception violate the Religious Freedom Restoration Act. Hobby Lobby does not cover this basic reproductive health support for its female employees. 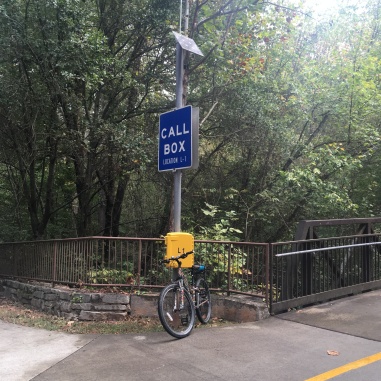 * There’s a whole body of work happening right now about how to make cities Safer for Girls, by the way. I’ve written about harassment a bunch, but I’ll do a whole separate post on small steps cities can take now to make them safer for girls and women. Sneak peek: I’ve been asking for solar-powered call boxes on our parks-based multiuse path (which is directly across the street from the middle school), such as the ones in the nearby cities of Roswell and Alpharetta (pictured), since before our paths were built yet they still have not been installed.

A small sample of the daily dangers in #DunwoodyGA for #VulnerableRoadUsers. Roads mentioned have too-narrow unprotected paint-on-the-road that doesn’t meet #NACTO guidelines. No more #greenwashing. #ProtectedBikeLanesNow See previous post
A motor vehicle driver hit a person on a bike yesterday right around the corner from where I filmed this 3 days ago. Prayers 🙏. I wasn’t going to post this because #DunwoodyGA refuses to take real, immediate action that meets #NACTO guidelines and I’m tired of wasting my nonrenewable resource of time, but maybe every little bit helps and there will one day be a tipping point. Perhaps today. #ProtectedBikeLanesNow #PaintIsNotProtection #PopUpTacticalUrbanism No more #GutterOfFailedImagination#SharrowMindedThinking or #CompromisesThatKill. No more #ConeOfSilence No #ghostbikes ever wanted here. Stop the #bikefriendly #greenwashing. @bikeleague @peopleforbikes @bycs_org @bikelaw @peepslawyer @deutschlynn @dunwoodynorth @joe4dunwoody
Those who say it can’t be done are getting in the way of those of us who are doing it. Please stop putting the #GutterOfFailedImagination, #SharrowMindedThinking, and #CompromisesThatKill in our way. Join us in the truth of lived experience, and the refusal of pervasive #cityhall #groupthink and #publicrelations #greenwashing. There’s no more time to waste. (see related #TikToks at SpeedOfBike)
The #bikes get so excited to find out whose turn it is. Today, it’s #Joy. #JoyRide #ebike #bikelife #CenterJoy
Hi, @barndunwoody! Will u please add secure covered #bikeparking? Here’s why. Thanks.
#bikelife #bikelove #CenterJoy #FeelLikeAKidAgain See link in bio for #free #classes
You are #art in motion when you’re #TravelingAtTheSpeedOfBike with #ArtsyBike merchandise. All proceeds used to help more #women and #girls ride #bikes. See link in bio. #YouGoGirl #AccessForAll
“Mister Radish” (as the neighborhood kids call him), surviving our “winter storm” yesterday with his usual good cheer😀 #SharingGarden
#BikeJoy for life #BikeNative #FeelLikeAKidAgain
Yep, all that fit on my bike 🚲 in just my #Plasket (along with my rollerskates 🛼), dangling off handlebars and in my across-the-back bag. And the eggs 🥚 made it home uncracked 🤸‍♀️❤️
My younger daughter also made 2 stunningly delicious dinners, one Greek/1 French (served with corresponding themed movies) during my 1st week at my new full-time job. That was really nice, @gillianmbaker 🤗 #quiche #vegetarian
My younger daughter made this large, gorgeous, delicious #challah bread 🤸‍♀️
Ut, oh. They’re talkin’ #snow ❄️ for Metro #Atlanta. Let’s see what my book has to say about that . . . #TravelingAtTheSpeedOfBike #snowpocalypse
#Fortune500 @gacommute @perimeterchamber @UPS @ihghotels @mercedesbenz @newellbrands #micromobility @NACTO @bikeleague @peopleforbikes @bycs_org #logistics #equity #triplebottomline #sustainability #resilience #recruitment #accessforall #wellness #worklifebalance #bikelife #Funwoody #SandySprings #Atlanta @georgiaclimateproject #bicyclemayor #COVID
What r u waiting for? There is no “someday” to do the things u want to do. Just start #UseItOrLoseIt #YOLO #MoveYourBody #bikelife #rollerskate #shuffledance
#shuffledance #MoveItOrLoseIt #UseItOrLoseIt #CenterJoy #workbreak #rollerskate #bikelife #instagood
Lol thinking back to when I used to think I didn’t belong at the #skatepark
U deserve better
(Sound up — captions on #TikTok at SpeedOfBike). Hope to see u out and about #TravelingAtTheSpeedOfBike , #rollerskating, and #shuffledancing! Keep planting seeds of change! Good grows. 🚲❤️🌱🌎🌍💃🏻🥬🛼🤸‍♀️
Ride #bikes. Grow #food. Center #joy. Follow on #TikTok at SpeedOfBike 🚲❤️🌎🌍🌱🛼💃🏻🤸‍♀️🎨🎶🙏 #LeapOfFaith #TrustTheJourney