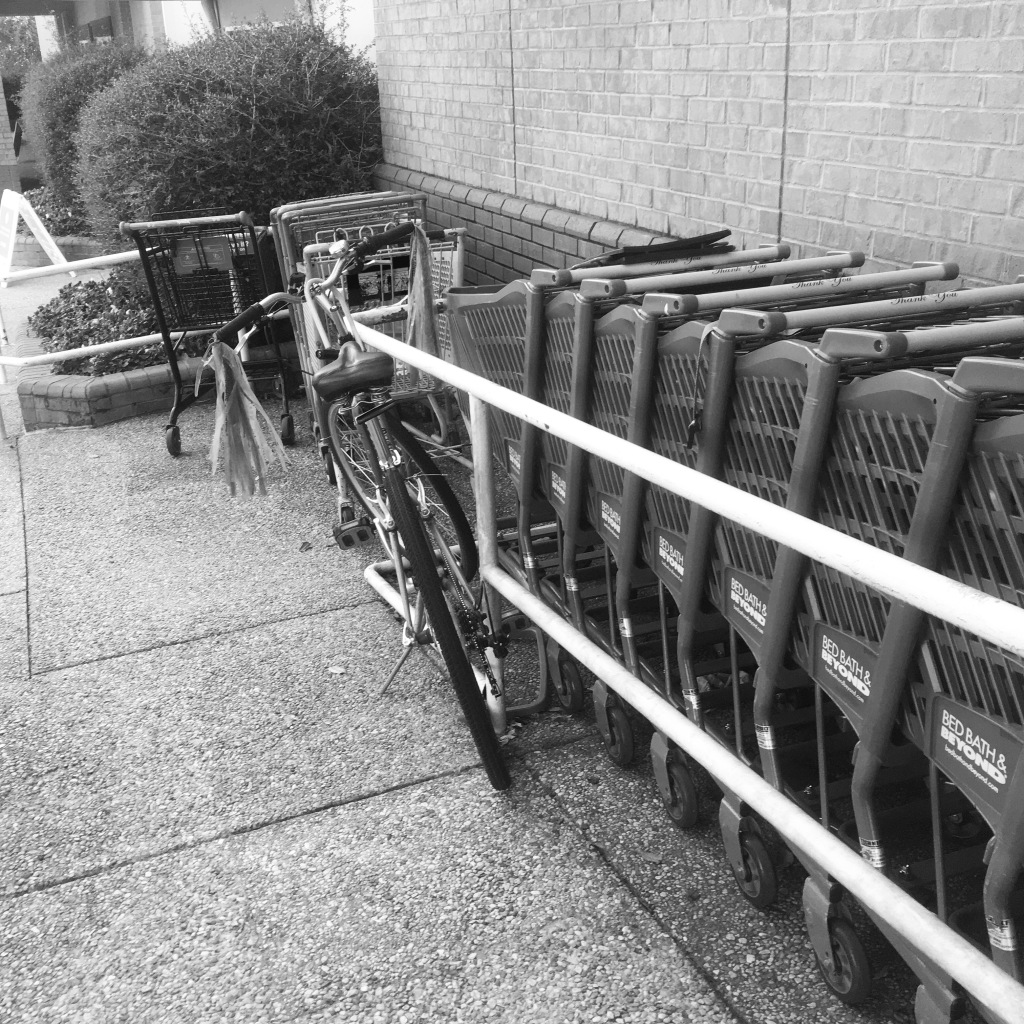 Magic and I ran errands locally in the metro-Atlanta suburb-cities of Dunwoody and Sandy Springs yesterday while Traveling at the Speed of Bike. I was #OneLessCar for a total of 9 miles (which adds up super fast, by the way). I give you a tale of 3 bike racks.

1: REI They have one of the only bike racks in the area (as one might hope for from a sporting goods place — although Dicks’ across the street doesn’t have one, even though they promised me they would before they opened years ago), but it’s too close to the wall. See photo below — how did they possibly get this wrong?! I tweeted to ask if they would consider installing correctly — not only is this unusable by a regular bike unless I take up the whole rack sideways, but fuggedabout cargo bikes, which REI sells, by the way. (Note: It has been this way for a few years, and I’ve asked numerous times. I buy probably half my bike stuff online now.)

2: Panera Bread I voted with my dollars for lunch here as a direct result of them having a bike rack —  #BikesMeanBusiness. (Panera also has one of the best vegetarian sandwiches anywhere.)

3. Almost every other shopping center in suburbia That photo at the top of this post is at Bed Bath and Beyond in the Perimeter Community Improvement District area of metro Atlanta. It’s what it looks like pretty much everywhere I go in the ‘burbs. (I bought nothing.) All I ask is one little u-rack for an entire shopping center. The Walmart shopping center, for instance (where a teenage girl saved herself from an attacker at Hobby Lobby, and where there is this private bike share station) has no bike rack at all anywhere, and the poles have thick bases around them to which it makes it impossible to lock a bike.

I see the way forward as:

1. Cities include bike racks as part of their street furniture (along with benches, street lights, and trash/recycling/compost receptacles); and/or

3. We as bike riders continue to vote with our pedals for places that show they want our business to encourage more places to affirmatively add them.