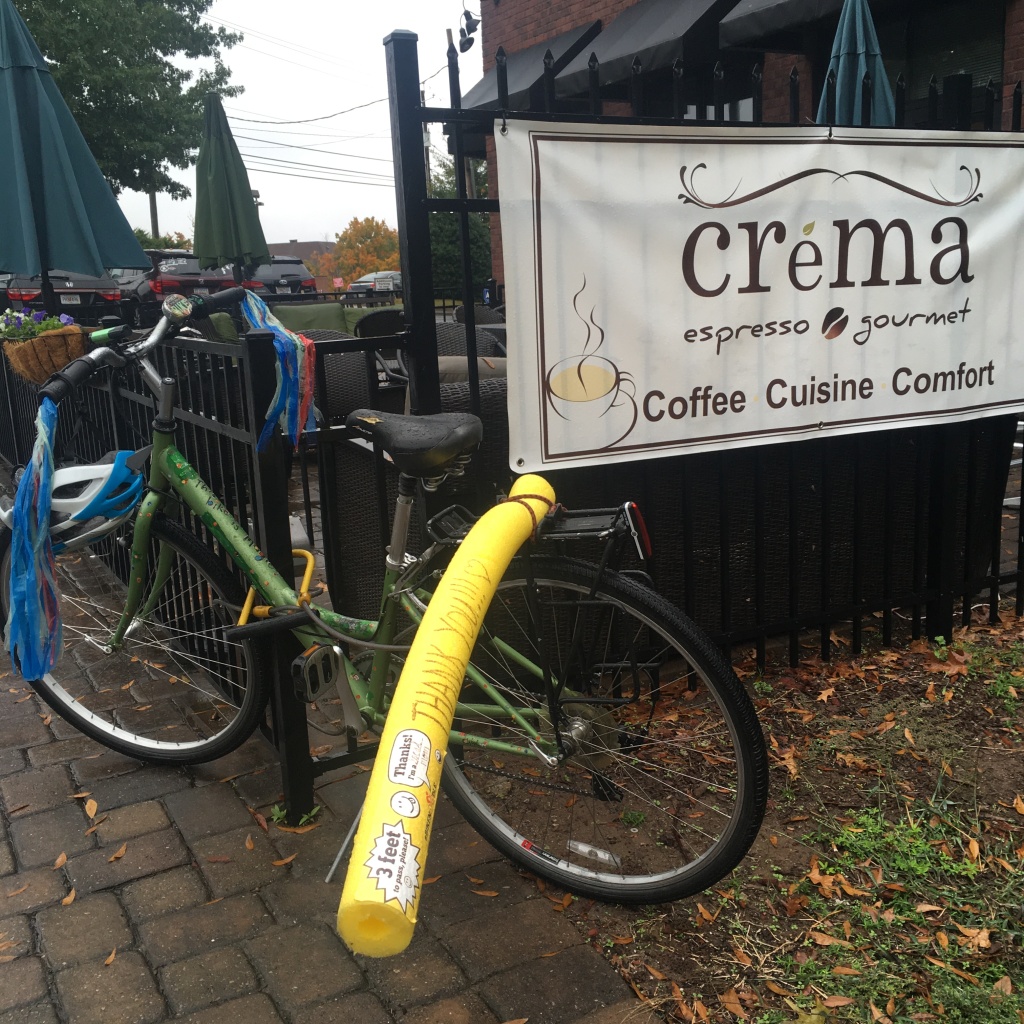 So I was unlocking Magic at a local coffee shop yesterday after meeting with my friend, Richard of the Worms (how he got that name is a story in my book, Food for My Daughters — by the way, he just agreed to take care of the descendants of the worms in that story if I go to Uganda).

I was about to ride home in the rain with BikeNoodle on my self-designated National Bike Noodle Day, and was feeling sort of disappointed that this coast-to-coast opportunity to tell our city leaders we’re tired of waiting and we’re not gonna take it anymore didn’t catch on as a viral movement.

I was sort of annoyed that every day I see bike riders report on social media, yet again, how they were close-passed and almost killed and harassed, yet only about 10 people* to date across the USA (where deaths for those on bikes are escalating) have tried Bike Noodle despite its 3-year track record (as of this upcoming Friday) of virtually eliminating illegal passing of bike riders by motor vehicle drivers. In short, I was ready to just hang it up with trying to make a difference with this stupid pool noodle.

But then, a woman walked across the rainy parking lot, pointed at BikeNoodle, and asked me, “Excuse me. Do you have that sticking out so that drivers know how much room to give you?”

Such a simple question, but it showed (1) interest, and (2) understanding (way more so than that hot mess of a conversation that recently happened by my current city leaders regarding a proposed Vulnerable Road User Ordinance). It didn’t stop there. I briefed this woman, named Stacy, on BikeNoodle. After I mentioned this blog, she noticed my body camera and said, “Wow, you’re really a biker.”

I answered, “I’m actually not. I’m just trying to get a half mile from a coffee shop to my home without a car!”

She looked closely at how the noodle was attached with a bungee cord and replied, “That is a great idea. I’m going to try that.”

So many other people have said this, and yet, nothing. But this time, something felt different. And thus, in my estimation, the baton (or, shall I say, pool noodle) has been passed. Stacy, if you’re reading this, no pressure or anything, but it’s all in your hands now.

Oh, sure, I’ll still be riding around with BikeNoodle here in suburbia, at least for the next seven months (because it’s the only way to get places while Traveling at the Speed of Bike — I even used it on the Ride to Lunch with the Mayor). BikeNoodle  will, of course, show up in photos (and it’s featured in Chapter 6 of my book). And I’m happy to talk with people about it, as usual, although frankly, there’s not much more to say than what’s in this video:

And, of course, if you roll your windows down while passing me safely, you may hear a catchy song from that crazy lady who dares to ride her bike (my god, the audacity!) in a self-proclaimed family-friendly city where less than .01% of children ride their bikes to school.

That could be you, Stacy! You go, girl.

Okay, fine. I know I left some of you way back at the mention of Richard of the Worms. Here’s a video from 11 years ago:

* although, of course, that’s a 10x increase over 3 years ago, and who knows what the ripple effect will be, so bravo to those folks for doing it