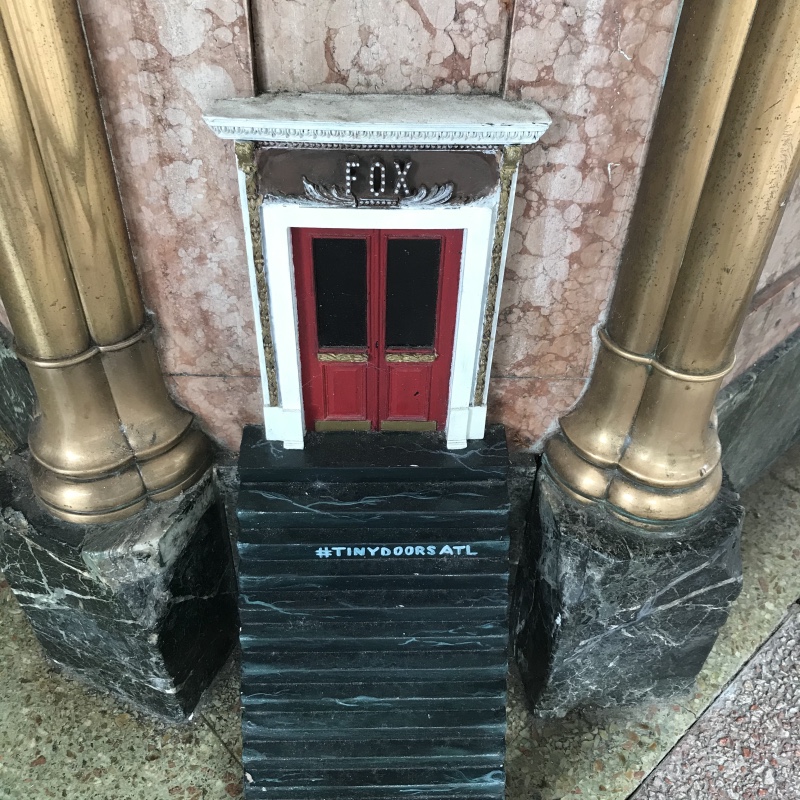 As promised, here is another of my Ride Spot self-guided tours. This one is the “Tiny Doors to Tony Doors” Tour. See the Ride Spot link for more photos.

An artist named Karen Anderson Singer created a public art series named Tiny Doors ATL that features, well, tiny doors! They are installed all over Atlanta and designed to honor and/or replicate their specific locations. You may have already seen a couple of them on my Women on the Wall Street Mural Tour. Well, I have three more for you, plus you get to ride through some “tony” (fashionable) neighborhoods and even to a theater that premiered plays (such as The Color Purple) that went on to win Tony Awards. From Tiny Doors to Tony Doors! How fun is this, right? This route takes you from the Fox Theater, to the Atlanta Beltline, through Piedmont Park, to the Woodruff Arts Center, and back to the Fox and includes side-street rides in two different neighborhoods (Midtown and Ansley Park).

I really love this route and I find it actually less stressful than the often-crowded Atlanta Beltline. You may feel hesitant about riding on Peachtree Street, but you may be surprised how pleasant it can be (and it’s just a couple of blocks at the beginning, and I give you an alternate way at the end if you prefer it). Note: if you are new or newly returning to bike riding or have some concerns about this route, please consider taking my basic bike skills class via text, downloadable PDF, or in person —— see https://travelingatthespeedofbike.com/classes/. The biggest problem on Peachtree Street, in all honesty, is if there is a parked delivery van in front of you. (If interested, see https://travelingatthespeedofbike.com/bonus-resources/ for a little tip video about how to change lanes if a motor vehicle is parked in front of you.)

Otherwise, it’s pretty common for bike riders to just “take the lane” (which means ride in the center of the lane — Peachtree Street has two lanes in each direction and you can stay in the right lane on this route, and motor vehicles can easily pass you in the left lane), and proceed like any other vehicle. You’re even allowed to ride side-by-side with a friend in the same lane. The ironic part is that this route takes you on a two-way protected bike lane (called a cycle track) on 10th Street on the south side of Piedmont Park that was actually named one of the top ten bike lanes in the USA a few years ago by People for Bikes but it’s now missing some of those white poles (called bollards) and it feels a little less safe to me than Peachtree Street!

Full disclosure: Once you head up through Piedmont Park toward the Atlanta Botanical Garden and into the neighborhood of Ansley, things get hilly.  If you’re not used to hills or if you don’t have a bike with gears, you may want to consider this route only if you’re riding an ebike. (Although I do show you a photo of Relay Bikeshare, I wouldn’t suggest them for this route as they are heavy and clunky and they don’t have an electric option. )

Don’t pay attention to the time estimate given on this route. This could easily take you two hours, even though it’s only five miles, if you linger at various stops. Your biggest challenge will be not veering off course to take in additional sights. Or, you know what? Feel free to do that. That’s the joy of Traveling at the Speed of Bike!

View this document on Scribd

As a People for Bikes Ambassador, I am creating and sharing self-guided bike tours that are low-stress and welcoming. My listed tours include: