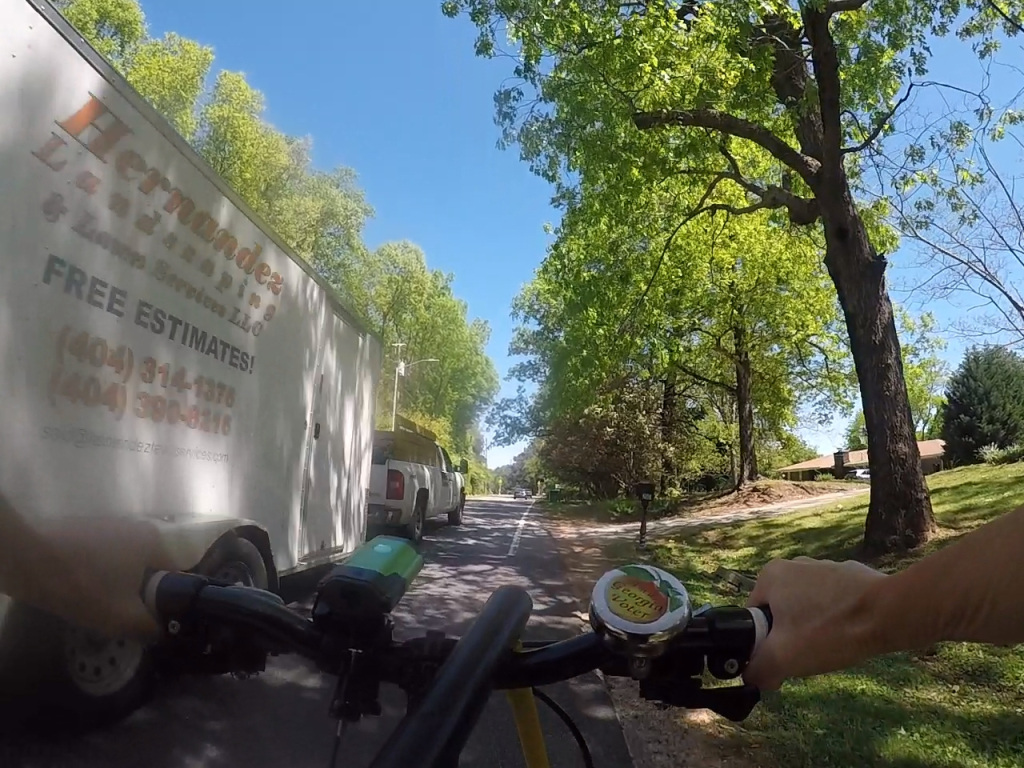 There’s nothing more I can say or do in the place I’ve called home for twenty five years next month (and all 12 years since it became the newest city in the United States in December 2008), and I am about to announce my call to serve elsewhere. I have made these same comments over and over again, in focus groups and surveys and emails and in-person at city hall while serving on commissions and steering committees and citizen input sessions. And yet, the greenwashing continues. Time is nonrenewable, and my potential for any impact here is done.*

The good news? A multiuse path may finally be coming on a stretch of road I can’t avoid to get to my current home. In fact, it was the very stretch of road where I “took the lane” (as is recommended in such circumstances) for one minute and eight seconds (according to my body camera), and a man where I live called me a curse publicly on Facebook for doing so, and other people gave him the thumb’s up. A driver hit and knocked a twelve-year-old girl off her bike this past Saturday (and was not charged). A driver mowed me down nearby on July 13th (and did not stop). That’s where I live.

The curse story (and more), by the way, is in my book (all proceeds from which are used to help more women and girls ride bikes). I’m currently coaching two refugees-of-war who moved to the USA from a refugee camp in the country to which I am scheduled to go as a Peace Corps Volunteer (delayed for at least a year due to COVID-19). I just bought them lights for their bikes with book proceeds, so thank you.

Anyway, for posterity, here’s my latest comment on a public post about that road, where the city continues to greenwash its existing unprotected too-narrow bike lanes:

I like the addition of a multiuse path here. Thank you for that. Please note where the map visual indicates that bicycle lanes are complete. This is not accurate. The paint currently on the road does not create infrastructure that meets NACTO guidelines for speed and volume of motor vehicle traffic and should therefore be considered temporary (not completed) as it does not provide safe access for all as required by the Comprehensive Land Use Plan. We must stop greenwashing this. Our only way forward is honesty about it.

Please also note that the most recent citywide bike plan presented to city hall divides bike riders into more and less experienced (while centering only one type of riding as the point of comparison), thereby not recognizing that even experienced riders choose not to assume the outsized risk of riding in infrastructure that doesn’t meet national standards nor does it take into account the growing prominence in truly bike-friendly places of cargo bikes, adult trikes, adaptive cycles such as hand bikes (which snap onto wheelchairs), bikes with trailers and tagalongs, and more that do not fit in too-narrow unprotected lanes. Finally, studies show certain segments of the population (including the 51% of our city that identifies as female) do something called “trip-chaining” more frequently (which means make multiple stops such as to run errands and to drop off/pick up kids, which could be easier with cargo bikes), plus are passed more closely and harassed more often despite skill level.

(Note: This isn’t just a gender thing. More than 99% of the men here don’t ride bikes, most likely because they’re dads and husbands and don’t want to get killed, either. Also, men who do ride bikes are trip-chaining more often as well.)

* By the way, the city did just apply for certification as a Bicycle Friendly Community from the League of American Bicyclists, and I took a solid hour to fill out the rider survey. I recommended the city receive the Bronze level of certification since there is a lot of good and a lot of potential here. However, this greenwashing must stop.