Meet Thor. He was a Today’s Nice Stranger in 2010 (although I hadn’t started that street portrait series yet). I met him at the Your Dekalb Farmers Market and we got to talking because of his cargo bike (called a bakfiet, he told me, and imported from the Netherlands). It was the first one I had ever seen.

I included him in a post on my old blog, FoodShed Planet, titled Hallelujeh (or What Biking to School Just Might Have You and Your Children Saying) that was adapted for my book, Food for My Daughters (and includes my favorite story in the book about my younger daughter). Here is what I wrote about Thor in that post from almost ten years ago:

Meet Thor. He is from San Francisco and lives in Atlanta now.  He rides his three children to school each day in the bucket of this bike. He said to me, “Today is, what, our 14th Code Orange smog alert day this year?  It’s not going to change unless people stop driving.”

I don’t know where Thor or his kids are now. But I do know I met a bunch of folks with cargo bikes at the Atlanta screening for a new movie named Motherlode, which is basically about how cargo bikes are emancipating moms (especially) from having to spend years hermetically sealed in minivans.

Motherlode made me laugh and cry right there under the stars in Piedmont Park on that beautiful night (at which I arrived after Traveling at the Speed of Bike, of course). Big, huge thanks to a guy named Andrew Harding, whom I met for the first time that night, who made it happen. Although the movie focuses on moms, it’s clear many dads, like Thor and Andrew, are full partners in this movement as well. I strongly recommend PTAs consider hosting screenings at schools. Plus, cities that already host movies in their parks may want to showcase this one.

By the way, ten years after I met Thor, I still see so few cargo bikes in general (and almost none in the “family friendly” suburb-city where I live) that they are still a novelty. 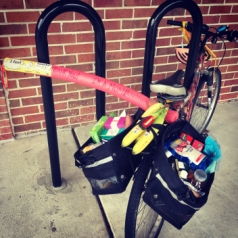 Note: I can already carry about $120 worth of groceries, and a Christmas tree, on my regular bike. Imagine what’s possible (beyond transporting kids) with a cargo bike (many of which are electric-assist).

If interested, see the rest of my decade-ending “look back” so far this week: