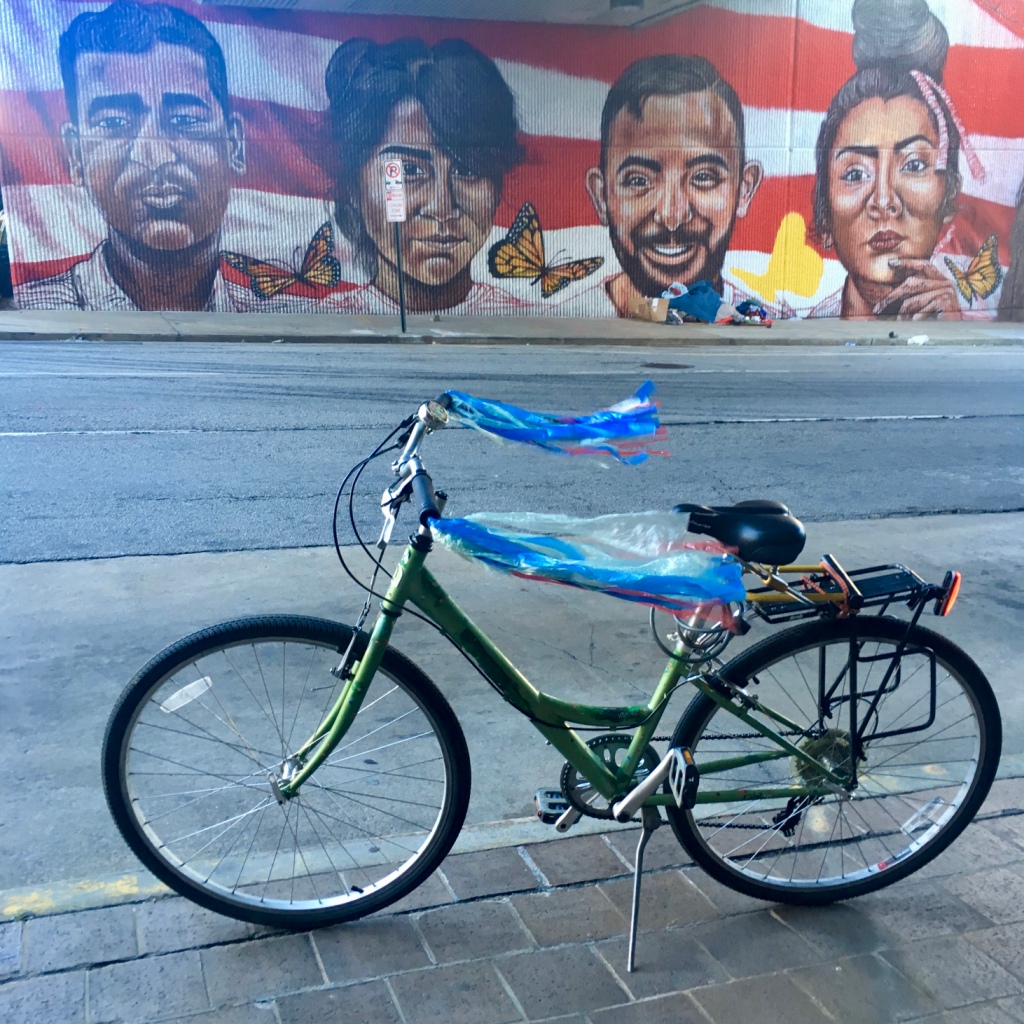 There’s a muralist in Metro Atlanta named Yehimi Cambrón whose trademark is the inclusion of a monarch butterfly. Her murals have been commissioned from Buford Highway to Decatur to Downtown Atlanta (pictured — that one was on the Off the Wall Tour from Bicycle Tours of Atlanta that was part of the Super Bowl experience in Atlanta in 2019).

Now with a new mural (by a different artist) featuring a monarch butterfly where the Everything Will Be OK sign used to be in Dunwoody (I’ll ride by and get a photo for you maybe today), along with the stunning Model Mile path in Brookhaven* (which will eventually span 12 miles and four jurisdictions to connect to the Atlanta Beltline, which also connects to the PATH that runs from Mercedes Benz Stadium to Stone Mountain), there is the growing possibility of connecting our cities through a monarch butterfly bike tour! What if milkweed could be planted along that entire tour route?!!

* Fun fact: Yehimi is an art teacher at a public school in Brookhaven (where, by the way, there’s a fantastic mural by Yoyo Ferro on the side of the school**). That’s where Robyn Elliott (the owner of Bicycle Tours of Atlanta) and I interviewed her for the Off the Wall Tour narrative. Here’s what I wrote for the tour as a result of that interview and additional experiential research:

So here we are in the shadow of the Gold Dome of the Georgia State Capitol. Now imagine you’re a young undocumented immigrant girl who is so moved by the memoir Night by Elie Weisel that you enter and win a statewide Holocaust-themed art contest, and when you go with your family to the Georgia State Capitol to the award ceremony, you are denied your $50 prize and the chance of being honored because you don’t have a social security number. Now imagine, years later, you are a DACA recipient (which is a program that protected undocumented immigrant children from being deported), a Goizueta Foundation scholar and college graduate, and an art teacher at the very high school you attended when you won that contest — and you are given the opportunity to choose the wall where you will paint your mural as part of the Off the Wall project. There was no question to Yehimi Cabrón that she would choose this wall.

Yehimi’s mural, titled Monuments: We Carry the Dreams, showcases portraits of actual members of the undocumented immigrant community, and their own words as shared during community meetings. They represent various ages and stages of the undocumented immigrant experience. The woman in the middle, for instance, is named Samantha Ramirez-Herrera and is a successful serial entrepreneur. One of her most profitable businesses is a video production company. Another person pictured is a student whose name Yehimi does not want to reveal for fear of putting her in danger.

Yehimi includes the image of a monarch butterfly as a symbol of her northern migration, and her resilience. She renews her work visa every two years. She does not know if it will be renewed each time, and in fact, considers it a very real possibility that this mural may last longer in this country than she will. Despite the risk of deportation, she has no intention of being quiet about the social injustices she sees her students and other members of her community experience.

** Yoyo Ferro’s mural on the side of Cross Keys Elementary School in Brookhaven, Georgia: