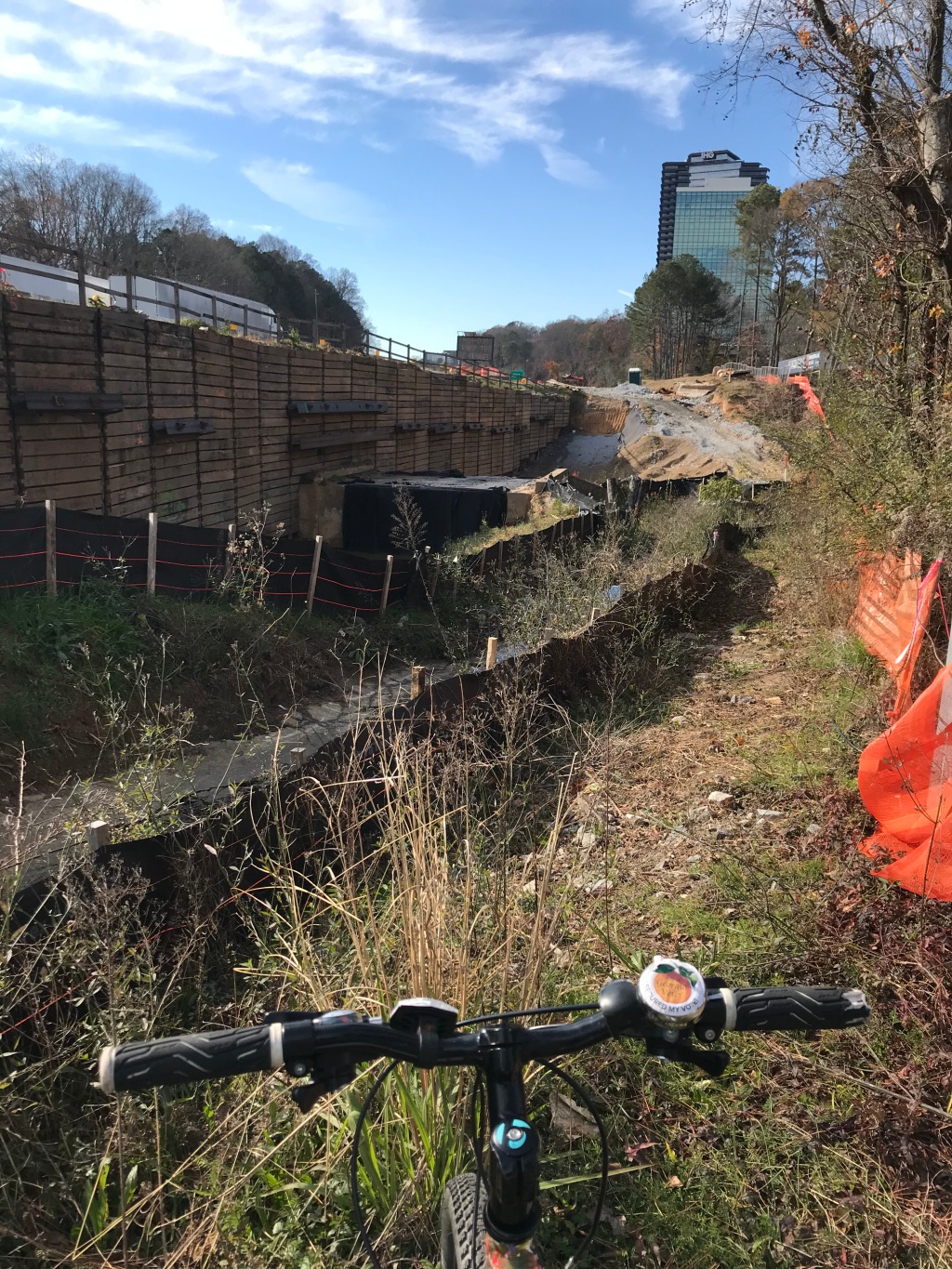 In the shadow of The International Hotel Group (now known as IHG, which is the greenest hotel company in the world), on the side of the deadliest highway in the USA, I see a path forward.

Although this path does not currently exist in a physical form, I’m not delusional. About six short miles away (but unreachable safely via bike), there already is a path alongside this very highway. It is possible. I’m not making this stuff up. I see it clear as day.

I know this construction site upon which I came after my daily Leap of Faith yesterday, alas, most likely isn’t a continuation of that path, however. There once had been talk of it, and I had tried to visualize it into existence (see Metro Atlanta Announces Bike/Ped Path Around the Entire Perimeter Highway). But now multimillion dollar construction to create motor vehicle flyovers and new highway exits and more exhaust and noise and barriers to access-for-all is deep in the works.

I’m doing that with UPS as well.

Someone with good intentions referred to that UPS post yesterday as “satire” as a way to alert folks that it wasn’t actually yet true. Fair enough, I suppose. However, the dictionary definition of satire is: the use of humor, irony, exaggeration, or ridicule to expose and criticize people’s stupidity or vices, particularly in the context of contemporary politics and other topical issues. There was no intended humor or irony in what I wrote. There was just a vision of what is possible, right now, today.

And right now, today, I see what could be so clearly that it actually exists in my mind’s eye while Traveling at the Speed of Bike. I invite you to join me in visualizing a new reality into existence. I invite you to not discount what’s actually possible as satire or wishful thinking. I invite you to take a leap of faith.

For inspiration, I’ll share with you the framed quote that has been hanging in my office since long before I worked at that UPS global headquarters:

By the way, public announcements will be made today all across the USA about which cities earned Bicycle Friendly Community designation in the latest round of awards from the League of American Bicyclists. (Here are a few recent posts of mine about that, if interested: Bike Friendly?; My Burning Question This Week as Metro Atlanta Bicycle Mayor; Street Photography, and a Street Safety Update; Atlanta by Bike, and Why Metro Atlanta Leaders Are Invited; 7 Low-Hanging-Fruit Actions.)

This follows, coincidentally, yesterday’s announcement of South Bend, Indiana’s former mayor and U.S. presidential candidate Pete Buttigieg as the new Secretary of Transportation in the upcoming Biden/Harris administration. Fun fact: Mayor Pete presided over South Bend when it achieved silver-level Bicycle Friendly Community designation in 2018. This gives me hope, as opposed to four years ago when the promise of infrastructure improvements (which never happened) were the only thing I saw as positive in the then-new administration. (A whole story about that is in my book, proceeds from which help more women and girls ride bikes.)

There will be city leaders who will celebrate their new Bicycle Friendly designations today, and others who will lament not receiving the award for which they aspired. Honorable mention won’t feel honorable, and they’ll try to shift the blame for that. I invite you instead to join me on a new, joy-centered path forward that isn’t padded with ancillary actions but actually works to make it easier and safer to ride a bike, right now, today. No more Cone of Silence. No more dismissal as satire.

“To live in a great idea means to treat the impossible as though it were possible.”

We are living in a great idea right now about what is possible.

And you are needed to suspend belief about what is, and create the rubber-hits-the-road success story of what could be.

Those who say it can’t be done are getting in the way of those of us who are doing it. Please stop putting the #GutterOfFailedImagination, #SharrowMindedThinking, and #CompromisesThatKill in our way. Join us in the truth of lived experience, and the refusal of pervasive #cityhall #groupthink and #publicrelations #greenwashing. There’s no more time to waste. (see related #TikToks at SpeedOfBike)
The #bikes get so excited to find out whose turn it is. Today, it’s #Joy. #JoyRide #ebike #bikelife #CenterJoy
Hi, @barndunwoody! Will u please add secure covered #bikeparking? Here’s why. Thanks.
#bikelife #bikelove #CenterJoy #FeelLikeAKidAgain See link in bio for #free #classes
You are #art in motion when you’re #TravelingAtTheSpeedOfBike with #ArtsyBike merchandise. All proceeds used to help more #women and #girls ride #bikes. See link in bio. #YouGoGirl #AccessForAll
“Mister Radish” (as the neighborhood kids call him), surviving our “winter storm” yesterday with his usual good cheer😀 #SharingGarden
#BikeJoy for life #BikeNative #FeelLikeAKidAgain
Yep, all that fit on my bike 🚲 in just my #Plasket (along with my rollerskates 🛼), dangling off handlebars and in my across-the-back bag. And the eggs 🥚 made it home uncracked 🤸‍♀️❤️
My younger daughter also made 2 stunningly delicious dinners, one Greek/1 French (served with corresponding themed movies) during my 1st week at my new full-time job. That was really nice, @gillianmbaker 🤗 #quiche #vegetarian
My younger daughter made this large, gorgeous, delicious #challah bread 🤸‍♀️
Ut, oh. They’re talkin’ #snow ❄️ for Metro #Atlanta. Let’s see what my book has to say about that . . . #TravelingAtTheSpeedOfBike #snowpocalypse
#Fortune500 @gacommute @perimeterchamber @UPS @ihghotels @mercedesbenz @newellbrands #micromobility @NACTO @bikeleague @peopleforbikes @bycs_org #logistics #equity #triplebottomline #sustainability #resilience #recruitment #accessforall #wellness #worklifebalance #bikelife #Funwoody #SandySprings #Atlanta @georgiaclimateproject #bicyclemayor #COVID
What r u waiting for? There is no “someday” to do the things u want to do. Just start #UseItOrLoseIt #YOLO #MoveYourBody #bikelife #rollerskate #shuffledance
#shuffledance #MoveItOrLoseIt #UseItOrLoseIt #CenterJoy #workbreak #rollerskate #bikelife #instagood
Lol thinking back to when I used to think I didn’t belong at the #skatepark
U deserve better
(Sound up — captions on #TikTok at SpeedOfBike). Hope to see u out and about #TravelingAtTheSpeedOfBike , #rollerskating, and #shuffledancing! Keep planting seeds of change! Good grows. 🚲❤️🌱🌎🌍💃🏻🥬🛼🤸‍♀️
Ride #bikes. Grow #food. Center #joy. Follow on #TikTok at SpeedOfBike 🚲❤️🌎🌍🌱🛼💃🏻🤸‍♀️🎨🎶🙏 #LeapOfFaith #TrustTheJourney
Big #2022trend #prediction!!! #yoyo
See previous posts for how this #shuffledance routine looks all put together (or u can just #freestyle!) Practice along with me this week as we lead up to the #global #NewYearsEve #dance #party! (Yes, step 8 is a variation of step 2!) #runningman #pollypocket #charleston #cuttingshapes #TheJerk #centerjoy #selfcare #instagood