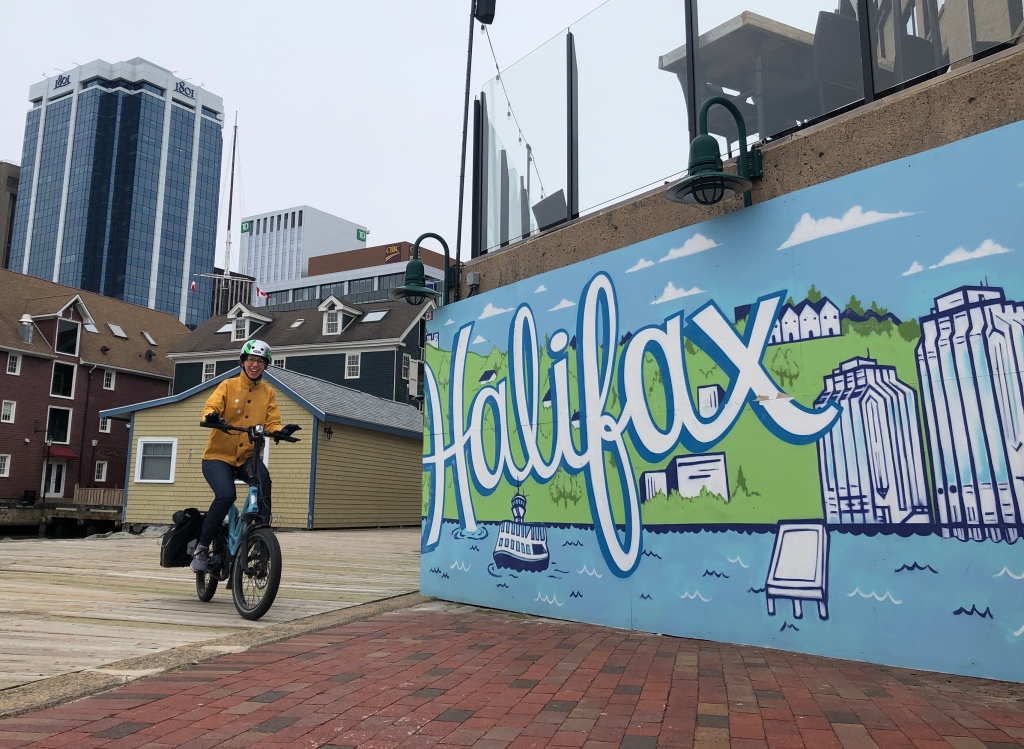 The Macdonald Bridge spans Halifax Harbor in Nova Scotia, Canada. It underwent repairs a few years ago. You would not have met Jillian Banfield on it during that time. That’s not because people on bikes weren’t given a way to get across during construction. They were. They were told to walk their bikes across it.

You would not have met Jillian on that bridge because she could not walk it.

“Could not walk it?” you might ask, perplexed. If you live in Halifax, you’ve most likely seen this professionally-dressed woman easily riding an average of 20-kilometers a day on a two-wheeled bike in all kinds of weather (hello, studded tires). How could she not walk that stretch of bridge? You might be thinking she’s clearly able, right?

You’d be wrong. Jillian is one of the 50% of people with disabilities who can successfully ride a two-wheeled bicycle, or the much-higher percentage who find using some kind of cycle easier than walking (according to Wheels for Well-Being, a UK-based advocacy organization for inclusive cycling). Jillian was diagnosed with arthritis when she was a baby, and it has gotten progressively worse. Her ankles right now are considered to be end-stage. Bone-on-bone. Pain.

Jillian grew up not seeing representation with which she could identify. She struggled to meet other people’s forced physical standards of achievement, falling short in classes from gym to swim. Learning to ride a bike took forever as a kid, but she did it (for a little while). Then when the grad-school walk to campus got too hard, bike-riding set her free, on her own terms.

After earning her doctorate in social psychology, with a big emphasis on prosocial behavior and empathy, Jillian moved back to her home city of Halifax. She started volunteering while working as a project manager in the Department of Anesthesiology at the Nova Scotia Health Authority, where she helps empower people by involving them directly as co-investigators so that they have a voice in research. She bike-commutes every day.

“I found my people in the cycling community,” Jillian explained. “After a lifetime of being introverted and shy, I could now break down those barriers on bike.”

Sounds like a great success story, right? Not quite. Turns out all those scenarios that those of us without mobility disabilities deal with every day become insurmountable barriers for Jillian. These include:

Walking her bike is simply not an option for Jillian. And the fact that she appears “able” makes harassment and misunderstanding more common.

Jillian felt a calling to create systemic change representing people with disabilities as well as others facing public-space mobility challenges such as immigrants, people of color, and those experiencing homelessness. She served on the city’s Accessibility Advisory and Active Transportation Committees, and as a board member with the Halifax Bicycling Coalition.

In 2019, she was named the Halifax Bicycle Mayor with the Amsterdam-based social enterprise BYCS as part of a global consortium of 120 bicycle mayors (that’s how we met, as we serve on several working groups together there). Her main goal is to tell the stories of others who are underrepresented as people on bikes in her city.

And she has. She proactively engaged people in Halifax to find out their perception of the frequently-bantered-and-heralded term “All Ages and Abilities” and recently published a report of her findings (you can read that here; here’s a blog post summary of it).

The big takeaway? “All Ages and Abilities” makes a great marketing slogan and sounds impressive as a goal in those plans on the shelves, but things fall apart when a city tries to actually define what it means and then implement it.

Here’s an example. When it snows in Halifax, like in many cities, the sidewalks and bike lanes often don’t get cleared (and definitely not first). Jillian told city officials that she doesn’t own a car, nor do many other people with disabilities. Her bike is her mobility aid, and without being able to use it, she is stuck in her home. It’s not just “nice” (as one city councilor argued) when the sidewalks and bike lanes are cleared. It is necessary for her to be able to go about her activities of daily life, including getting to and from her job.

I asked Jillian if there is a high chance that some people we see riding a bike every day are disabled.

Jillian and I are kindred spirits in several ways, besides the use of a bike for primarily transportation purposes and the focus on marginalized populations (I specifically focus on women and girls with my classes). She believes that the common perspective that we have to reach a happy medium as we plan and implement access changes actually leads to accepting the inadequate status quo, and we should not compromise on ideal infrastructure. (I verbalize this as: Compromises kill, and better-than-nothing equals nothing.)

The pace of change has been slow, however, and Jillian, by nature, is not particularly hopeful for the future. But she laughed as she told me that — and laughter connects directly to joy, which is the secret weapon of bike riders. Our joy can move mountains, and perhaps even one day make it possible for anyone to cross bridges.

Bridges, by the way, are increasingly connecting us across countries and continents all over the world through social media and other technology tools. I, in fact, interviewed Jillian via the Slack app, and plan to interview the other Canadian bicycle mayors that way as well during what is now their National Bike Month.

Yesterday’s global #RollingWave social media campaign for World Bicycle Day (in which bicycle mayors and elected officials from around the world posted photos of themselves waving on or by a bike) made it clear that we hold the power in our hands to engage and change the world when we work together.

Here was Jillian’s photo. She appears in an empty pool, but is part of a growing pool of people, as you can see in the rest of the #RollingWave photos here.

Thank you, Jillian, for all you do. And thank you for reminding us to define more clearly what the term “all ages and abilities” means; to make sure we are creating a rubber-hits-the-road reality that meets that definition; and to center the stories of those who continue to be marginalized.

As Metro Atlanta Bicycle Mayor, a League Cycling Instructor, a PeopleForBikes Ambassador, and the author of Traveling at the Speed of Bike (book and blog), I shine a light on people making it more welcoming to ride bikes and access public space close to home and around the world. Meet some more below! If you’d like to put stories to work for your company, municipality, or organization, see here.

Am on a 6-week sabbatical (until September 1). Rockin’ my #Plasket #bike basket (reclaimed ocean plastic), pitching articles, connecting with more #changeagents globally (this week included people in #Atlanta, #NewYork, #CostaRica, and #Tasmania), meeting new people #rollerskating, helping my family, and doing a listening tour in order to increase outcome efficiency this fall. Am also evaluating additional #activemobility, #sustainability, and #over50 #brandambassador requests. Hope to cross paths with you!
Look inside at TravelingAtTheSpeedOfBike.com/book #memoir #advocacy #leaguecyclinginstructor #cities #indie #author #bikeboom #bicyclingmagazine #nyt #wsj #oprahwinfrey #arnoldschwarzenegger #lebronjames #gaytalese #billcunningham #citibike
Thanks, Ron from Chicago! #TravelingAtTheSpeedOfBike
RIP, dear sir (1-year anniversary today). We r continuing your #GoodTrouble. #JohnLewis #GeorgiaStateCapitol #streetphotography
My last 2.5 weeks. Which coincided with the 1-year anniversary of surviving a #HitAndRun while #TravelingAtTheSpeedOfBike in the place I call home. This helped center #joy. #selfcare #rollerskate #RoadViolenceSurvivor #ThisIs57 #NotTodaySatan #LiveOutLoud
Today’s #LeapOfFaith. I still believe in #SlowDuckCrossing. I still believe in me.
Guess where I am?! #SlowDuckCrossing
Meet Daniel Eppstein, the latest story in an ongoing series of profiles of people making it more welcoming to ride bikes 🚲 and occupy #public space close to home and around the 🌎 🌍. See TravelingAtTheSpeedOfBike.com. @bicyclingmag @outsidemagazine @nytimes @wsj @guardian @bycs #bycs #bicyclemayor #TravelingAtTheSpeedOfBike
Nothing changes if we don’t change.
Practicing stopping (in more ways than one)
It was comin’ a toad-strangler today while I was #TravelingAtTheSpeedOfBike! Didn’t stop me from my daily #LeapOfFaith!
See TravelingAtTheSpeedOfBike.com and meet people making it more welcoming to ride #bikes and access #public space. I just added a bunch of links to bios of the amazing bike tour guides from @biketoursatl (which I was hired to write for their website). #bicyclemayor @bycs @peopleforbikes @bikeleague #bikeboom #TravelingAtTheSpeedOfBike 🚲❤️🤸‍♀️
Lol. I can only get better! (A year ago today I was contacting @peepslawyer after surviving a #hitandrun while #TravelingAtTheSpeedOfBike. Am grateful to be able to #rollerskate, and still ride my #bike, today.) #RoadViolenceSurvivor #ThisIs57
Now done. Movin’ on. #RoadViolenceSurvivor
If I interview u via phone/Slack/WhatsApp for TravelingAtTheSpeedOfBike.com (or when I get interviewed for podcasts, etc), it’s usually from here.
1st time skating at a skate park — and it’s one designed by #TonyHawk! 🤸‍♀️
Skates and bike match now ❤️🚲🤸‍♀️🎨
#public #peaches🍑 r almost ready, by the way
Also made it back to the #SharePeachtree pilot project. It’s an odd and interesting project for 3 blocks. The bulb-outs at the intersections seem to work well for pedestrians. The side lanes are weird, however. They look like bike lanes, but not really (there are bumpers at the end of each block), so people on bikes r confused by them. They are supposed to be for pedestrians, but pedestrians don’t get that intuitively and don’t use them.