Meet Amanda Clay. She is a policer officer on the Bike Patrol Unit in the metro-Atlanta suburb-city of Alpharetta, Georgia. I met her last summer when I volunteered at the ICanBike* camp where each year forty children and teens with developmental disabilities learn to ride a regular, non-adaptive bike in just a little over an hour a day for five days. She and her partner Alan Elfreth run this amazing program (after it was started by another group years ago).

Amanda grew up in Alpharetta and became a Police Explorer at age 14 (where she met her high school sweetheart and future husband, who is also a police officer). After earning her four-year degree at Georgia State University, she became a police officer in Alpharetta. She now lives in its revitalized downtown and feels a deep connection to her community, especially to those who were not being served. She told me:

“My Bike Patrol partner and I are only two people, but all it takes is faith the size of a mustard seed to make things happen. And, God, has it been a wild ride. We bit off more than we can chew, but everyone’s all in on a common goal.”

Officer Clay shared how some people with special needs may never be able to drive a car. Learning to ride a bike can enable them to experience independence and health benefits, expand their social life (including joining their families on rides), possibly get to and from a job, or even just help their families by running errands.

That may be enough to sing the praises of Officer Clay, but there’s more. Officer Clay serves on the Board of Directors of the local bike advocacy group Bike Alpharetta. She was instrumental in helping that organization assist the city in achieving Bicycle Friendly Community certification recently from the League of American Bicyclists. (You can check out the City of Alpharetta’s Bicycle Friendly Community report card here.)

What’s more, she and her partner (plus now there is a third member of the Bike Patrol Unit as well) organize every Bike to School Day, and she rides with seniors (and anyone else who shows up) on regularly-scheduled Silver Spokes trail rides on adult tricycles. (The city owns six adult tricycles, including one that can hold a person weighing more than 300 pounds.) (Note: I taught a Silver Spokes basic bike skills class in Decatur, GA for a year and have created this rubber-hits-the-road summary if your city anywhere in the USA is thinking about offering classes and wants some tips.)

Not considering herself a cyclist, Officer Clay initially jumped at the chance to become part of the Bike Patrol Unit when it was started in 2013 because she wanted to get out of the police car and become less cut off from the citizens she serves. Most of the time, you’ll find Officer Clay and the Bike Patrol Unit patrolling the city’s parks, a popular greenway path named Big Creek Greenway, and large residential and retail complexes. She shared with me:

“I’m out in the open, which makes me more vulnerable — but in a great way that is authentic and more human. Sometimes we’re people’s first real interaction with the police.”

As required by the State of Georgia, all officers on Bike Patrol Units undergo a 40-hour week-long course, Office Clay explained. She then added:

“I have to do everything other police officers do on my 12-hour shifts, but on a bike in all weather with thirty pounds of gear.”

Because these times are what they are and this suburb-city saw its share of protests recently, I asked the same question I asked the police chief in my nearby suburb-city of Dunwoody, GA. as a result of photos and stories from elsewhere that may have tainted the image of police officers on bikes for some people: Are police officers trained to use bikes as weapons as part of the police department’s use-of-force protocol? Both my city’s police chief and Officer Clay gave me the same answer. No. We do not train to use bikes as weapons.

I ride on the greenway frequently (my mother lives in Alpharetta) and I’m truly not sure if I’ve ever seen Officer Clay and the other members of the Bike Patrol Unit. Officer Clay was not surprised. She said that bikes are agile and able to get places that patrol cars cannot, and they tend to blend into the background.

That may be true, but just listening to the enthusiasm and passion of Officer Clay makes one thing abundantly clear to me. She truly stands out.

* ICanBike is part of the ICanShine family of camps, which also includes ICanSwim and ICanDance. If it doesn’t already, your city may want to host one. Here’s a terrific 2-minute video synopsis of ICanBike (although in Alpharetta the riders end the week riding their own bikes, which they provide and then take back home with them):

Note: The City of Alpharetta also hosts an annual bike drive to provide bikes to those who don’t have them. The collage below is from when I attended the day the donated bikes got fixed.

There was also a Free Bikes for Kidz pickup location in Alpharetta last year. See here for my story about that, if interested. Below are photos I took of people as they donated their bikes. If you have a bike you are not using or that your children have outgrown, please consider donating it to an organization near you that provides them to those who need them. There is a nationwide shortage right now during the biggest bike boom since the 1970s. 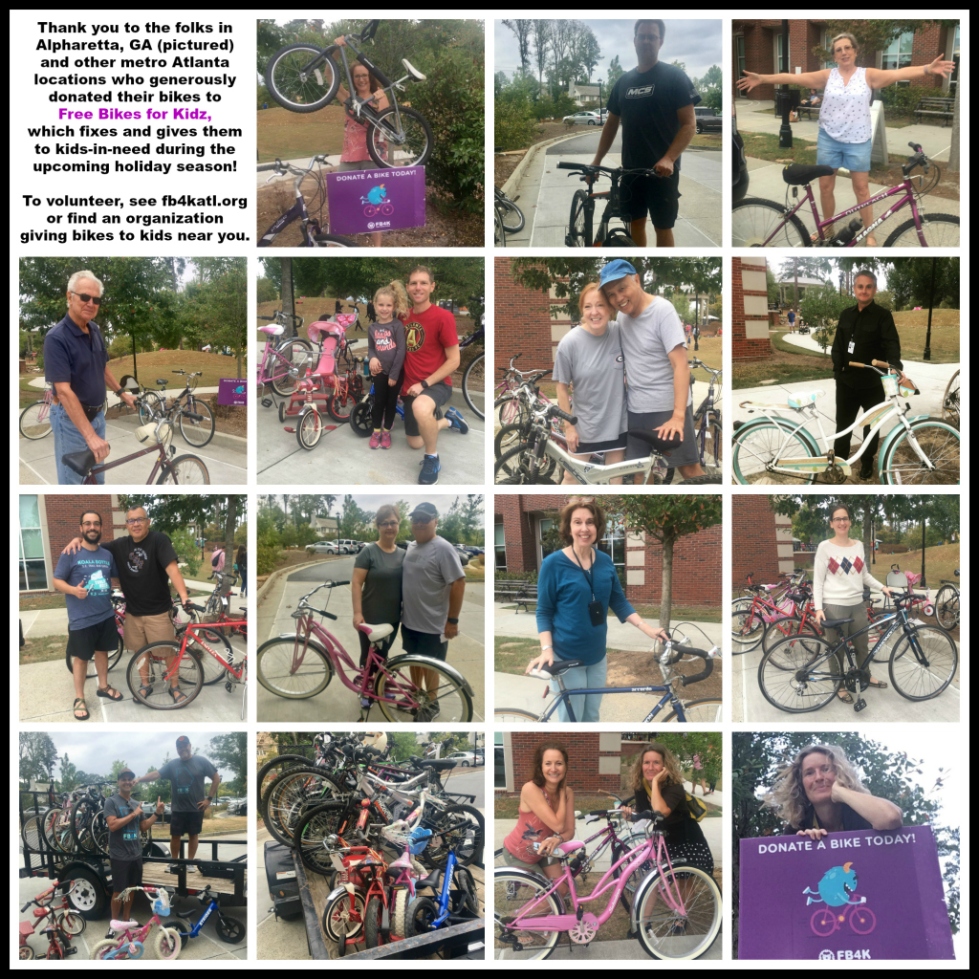 ** According to the ICanBikeAlpharetta website, recent research shows that over 80% of people with Autism and 90% of people with Down Syndrome never learn to ride a two-wheel bicycle. About 80% of the campers at ICanBike learn in a fascinating process through which each rider progresses from a stationary bike, to a tandem ride with an ICanBike employee, to a bike with rollers and a handle while initially pushed and then spotted by two volunteers, to their own regular two-wheeled bike. I saw it happen.

Tap in every day in August for my “You Go, Girl” series showcasing 31 Women in 31 Days who are making it more welcoming to ride bikes in the USA. If interested, you may enjoy my book, Traveling at the Speed of Bike. All proceeds from the sale of my book help more women and girls ride bikes.