Meet  . . . yourself. Meet the woman on the wall who sees you, who is you, as you are Traveling at the Speed of Bike.

Meet yourself where you’re at in your life right now, with compassion, in the midst of this seemingly-endless pandemic and global climate crisis, at what seems at times like the end of the world.

Meet the bike (perhaps now long forgotten in the attic or garage or basement) that could remind you of the girl you used to be while carrying you forward to the woman you have yet to become.

Meet your life in all its gore and glory head-on, on a path and at a pace that lets you look humanity in the face and recognize your unique and necessary place in it.

Meet these other women who may remind you of yourself in some way (or inspire you to become more of who you are meant to be), all of whom were featured during the past 30 days in this “You Go, Girl!” blog series and who are helping to make the USA (and world) more welcoming for bike riding. Meet Alison Dewey, Courtney Cobbs, Paige Metzger, Courtney Williams, Robyn Elliott, Vivian Ortiz, Amanda Clay, Deltrece Daniels, Nadya Dhadiala, Irene Lutts, Sabat Ismail, Timberley Jones, Melissa Balmer, Jenn Dice, Shanequa Gay, Jackie Marchand, 10 Women Who Wrote Bike Books I Love, Maria Borowik, Annette Nesse, and Aly Niklas. (Exciting news! It was just announced that my friend Courtney Williams, who is featured in the “You Go, Girl!” series, is the keynote speaker of the Georgia Bike Summit next month!)

Meet some of the women I have not had the opportunity to personally interview this month but whose work I still want to shout out here:

And meet me, as I know beyond a shadow of a doubt that I am still supposed to be here for some reason not yet fulfilled. It has been six weeks today since I somehow miraculously survived a hit-and-run while riding my bike in the place I call home. I felt violated, and I temporarily lost faith in my community. It also broke my heart that it was a woman who hit me, after the years I’ve spent trying to make this city safer for women to ride bikes. I then almost stopped doing one of the things that I love most (and, in fact, I was considering not even renewing my League of American Bicyclists membership and League Cycling Instructor certification, which would have expired today).

However, since then I’ve taken some positive steps to both heal and to help. I’ve ridden through the scene of the assault (plus more than 200 other miles elsewhere where I feel more welcome– you can see some of my recommended routes on Ride Spot*); spent time with my family; undergone a month of daily physical therapy for an injury I sustained and am now able to carry my gallon jugs again (and will be training with the bigger jugs again starting tomorrow), do my daily Leaps of Faith again, and hoist my bike over my head again; “forest-bathed” and created art; and secured legal representation.

I’ve also applied to the international organization BYCS (an Amsterdam-based social enterprise driven by the belief that bicycles transform cities and cities transform the world) to become the Bike Mayor of the community where I was almost killed in order to showcase common suburban issues that may, instead, benefit other communities; asked to be a People for Bikes Ambassador; kicked off the Trust the Journey team again (year 4!) in Biketober (spots now open if you’d like to join); recommitted to organizations providing bikes to girls around the world so that they can do their chores and go to school without getting raped (yep, this is a thing and the knowledge of this reality haunts me); and spoke with all the amazing women in the “You Go, Girl” series to be reminded of the power we hold in our hands.

And as I stood under the power lines yesterday with my bike and my head and my heart lifted up in hope, the undeniable truth was clear as day — I am part of a “we,” and we got this (or, at least, we could if we would work together more). 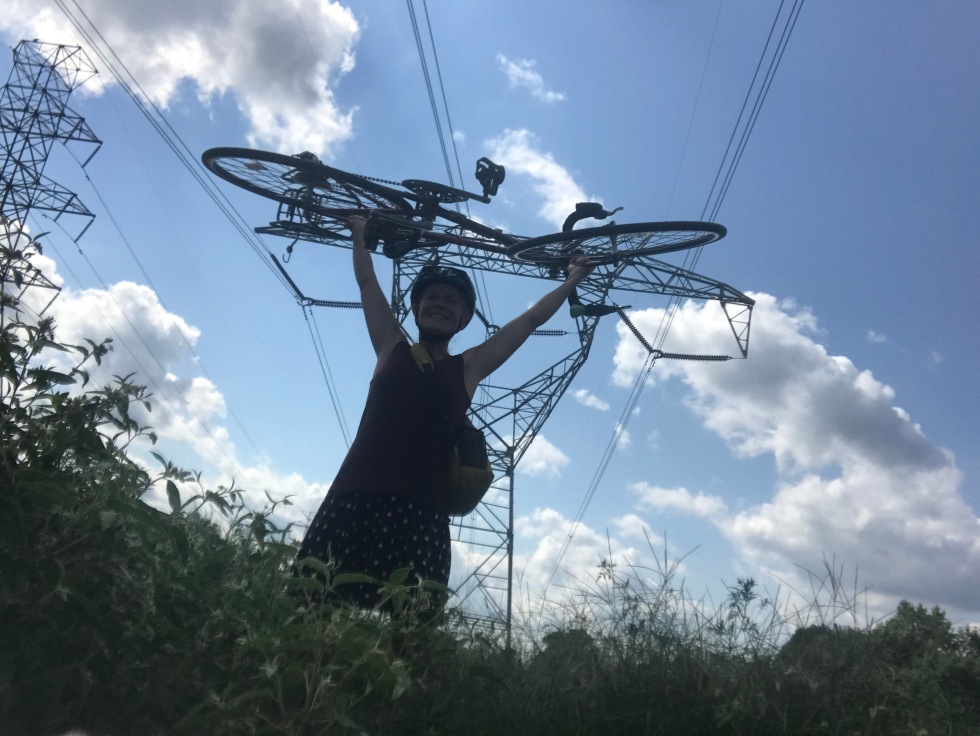 As my friend Timberley Jones (featured in the “You Go, Girl!” series) said after telling me about two crashes she survived, “I am not disposable.”

A seventeen-year-old girl named Obianuju Faith Osuegbu, born on my mother’s birthday, was killed on my 57th birthday last week not that far away in Winder, GA while riding her bike home from working at the supermarket (as I used to do at that age from Waldbaum’s on Long Island, NY), by a woman operating a motor vehicle while drunk.

Obianuju was not disposable. I am not disposable. You are not disposable. I offer my condolences (and donation) to Obianuju’s family, and my sincere thanks to all the women who gave so generously of their time and spirit this month to help me showcase for you just a tiny bit of what is possible.

Truth? The violation of my body (for which I’ve never received an apology, by the way), and my city’s ongoing failure to provide safe-access-for-all almost broke me. But it didn’t.

By the way, a couple of weeks before the hit-and-run, I found out that my date to leave for Peace Corps Uganda (originally June 4, 2020), was delayed for more than a year until August 2021 due to COVID-19. I was just about packed and ready to go, and I now have this unexpected year here. I decided right away to apply for CBS: Survivor and created this three-minute video (as required), which is cringe-worthy and yet completely who I am in all my vulnerable embrace of my motto Trust the Journey:

Interviews for people who make it past the video submission stage start in September. I have not received a call about that. And yet, that doesn’t really matter to me anymore.

I am already a survivor. As are all of us, in one way or another, during these trying times.

* My Ride Spot routes-to-date include:

I will be adding a new metro-Atlanta-based route each week. Hopefully, when I can travel again, I’ll add routes in Boston, NYC, Los Angeles, Pittsburgh, and Uganda! Here’s a video while Traveling at the Speed of Bike in Boston, if interested:

Thank you for tapping in to my “You Go, Girl” series showcasing 31 Women in 31 Days who are making it more welcoming to ride bikes in the USA. If interested, you may enjoy my book, Traveling at the Speed of Bike. All proceeds from the sale of my book help more women and girls ride bikes.