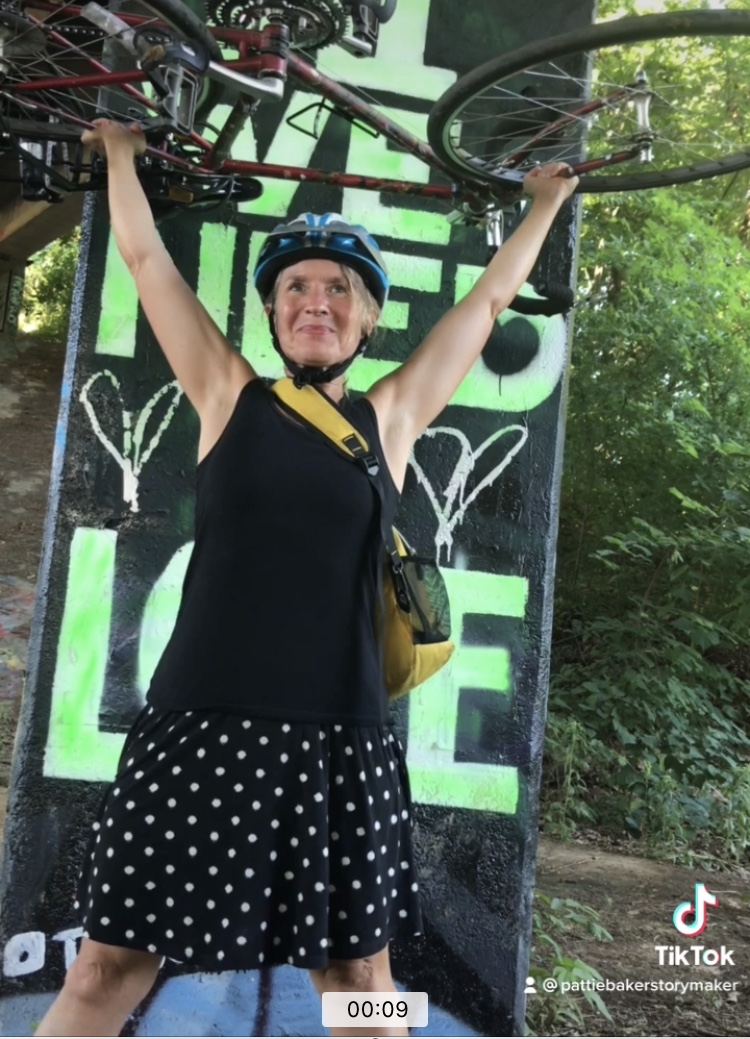 I filmed a little TikTok in front of this All We Need Is Love art on the Atlanta Beltline last week. As you know, however, we do need a little bit more than love to be safe while riding our bikes. We need honesty about rubber-hits-the-road lived experiences and refusal to accept the gutter of failed imagination — and I continue to commit to that.

July will be my ninth month as the first Metro Atlanta Bicycle Mayor as part of a global consortium of 120 others serving in similar capacities in their cities and regions. I’ll do my next executive summary at the end of July (click here for my six- month summary, which updated the three-month one).

I thought I’d take a moment now, however, to tell you what’s on my plate in case it’s something that hits home for you or in which you want to be involved. (Note: something immediately necessary, unfortunately tragic, or super exciting in my capacity as bicycle mayor* often comes up so any of these items may get bumped.)

Also, July 13th is the one-year anniversary of my survival of road violence one mile from my home. The post I wrote that day is the most viewed in the history of TravelingAtTheSpeedOfBike.com. Below are some of the countries from which people have tapped in.

I will be planning something for that day. I’m listing it here under my local action items, but my blog stats make it clear to me it will be global in its reach.

Regionally in Metro Atlanta/Statewide in Georgia

I contacted Jack Anninos, the State Bicycle and Pedestrian Engineer at the Georgia Department of Transportation, to ask some questions regarding the use of state roads for Open Streets events, as there are several people in Metro Atlanta who are interested in doing so.

One woman is already being told locally that it’s not possible. Lol, it’s obviously possible.

Everything is possible, and not only to benefit those who “pay to play” like for the annual opening of State Road 400, right? (Boy, does this photo speak volumes.) I will write a blog post summarizing that interview and Jack’s suggestions for accessing our state-run public space near you.

I am also hoping to interview and profile Tracie Sanchez (who originally hired me to teach numerous bike classes in the City of Decatur, which I did for a year). She works in the Georgia tourism industry to showcase trails and the economic impact of them on their communities throughout Georgia. FYI, bikes mean business, and every time cities make it hard for people to ride bikes to their local shops and restaurants, they go elsewhere (or risk getting killed if riding a bike is their essential transportation to get to work at those businesses).

Additionally, I reached back out to some of my recent Pedal Power with Pattie students about scheduling a group follow-up lesson, so that will be the one free class I offer in July. I’ll most likely be back with the girls in Clarkston in August. (Oh, and by the way, thanks for you generosity re: this the past two days. We’ve got some happy campers!)

If you have a request for a free class in September for women/teen girls, please reach out. I especially like teaching women/teen girls who are riding a bike for the first time in their lives. If my book goes viral, lol, I can then add additional classes with the proceeds. (Each class has a market value of $150 per person, per REI’s always-sold-out rate. Note: I get an occasional student who took that REI class and did not learn to ride in it. I’ve had every single woman who has taken a Pedal Power with Pattie class riding within two hours, although of course I can’t guarantee that.)

Request: If you’ve read and loved my book and have not yet written a review (see global links below**), please consider doing so. That helps more people find it and gives me something additional to use for marketing it. 100% of proceeds are used to help more women and girls ride bikes.

Oh, and I’m thinking of hosting a Zoom meeting for people interested in becoming bicycle mayors of one of the 70 Metro Atlanta cities or 10 counties. Note: I am still scheduled to leave for Peace Corps Uganda (delayed since my original departure date of June 4, 2020 due to COVID), currently planned near the end of this year, so I am motivated to grow the leadership and make sure our region continues to have a voice at the global table in this truly amazing bicycle mayor network before I go. If you are interested, please let me know and I’ll be sure you get the Zoom invite. I’ve already had conversations with people in four different Metro Atlanta cities, although all positions are still open.

Across the USA/Around the World

I have a short list of final people I am profiling in my “Meet” series. These include:

I also have plans to take the Vice President of the Business Network at PeopleForBikes (the national bike advocacy nonprofit for the bike industry) on my 10-mile “Best of Atlanta” Bike Infrastructure Loop.

And, of course, I’m continuing to create and share welcoming routes as a PeopleForBikes Ambassador. I’m currently working on one in City-of-Atlanta-Councilor/Mayoral Candidate Antonio Brown’s district (I had a series of emails with him earlier this year about a big idea of his) and recently did one in Councilor Farokhi’s district. Both tours showcase innovative steps forward that other city leaders across the USA and around the world can consider.

Finally, I’m continuing to encourage the #RollingWave on social media around the world that was truly an Olympian-sized success on World Bicycle Day (with even POTUS and FLOTUS participating). Join us!

*Also note: This is a 100% pro bono position. I have already donated more than $$50,000 in professional services. I am trying to rein that in a bit as it is unsustainable. If you would like to put my professional services to work for you, see here. Your continued support of my book, Traveling at the Speed of Bike, is appreciated as 100% of proceeds are used to help women and girls ride bikes. You can meet some of them here.

Amazon:  Here is the USA link. (Click here to order the print copy at the same price as Amazon but benefit local bookstores throughout the USA.) Links to book on Amazon in all global markets below.

United States of America: Look Inside

Additionally, here is a Book Club Discussion Guide, and scroll to the bottom here for a virtual book reading from Chapter Two: The Bike in the Attic

That’s a wrap on Week 1 (of a 6-week sabbatical to rethink things, and test some new ideas). Quit Facebook. Wrote zero blog posts (a miracle). Limited Twitter and Instagram (am trying to stay completely off, but cold turkey is hard, plus I had to call out egregious #greenwashing). Pitched 4 articles. Launched a serial release of a new book. Talked to people from #Costa Rica to #Tasmania. Helped connect some Metro #Atlanta folks re: #bicyclemayor stuff. Became a Beta-tester for two #activemobility services as a #TrustTheJourney #influencer. Had my weekly bocce game with hubby, and hung out with/helped my family. FYI, in the last 3 weeks, I have now #rollerskated at a school parking lot, a track, the top of a MARTA parking deck, a #TonyHawk-designed #skatepark, a multiuse trail, a cul de sac, my kitchen and foyer, a garage, and the mall parking lot.I have a LOT to say about my findings, but I’ll save that for another time! Hope to see u out there #TravelingAtTheSpeedOfBike!
Am on a 6-week sabbatical (until September 1). Rockin’ my #Plasket #bike basket (reclaimed ocean plastic), pitching articles, connecting with more #changeagents globally (this week included people in #Atlanta, #NewYork, #CostaRica, and #Tasmania), meeting new people #rollerskating, helping my family, and doing a listening tour in order to increase outcome efficiency this fall. Am also evaluating additional #activemobility, #sustainability, and #over50 #brandambassador requests. Hope to cross paths with you!
Look inside at TravelingAtTheSpeedOfBike.com/book #memoir #advocacy #leaguecyclinginstructor #cities #indie #author #bikeboom #bicyclingmagazine #nyt #wsj #oprahwinfrey #arnoldschwarzenegger #lebronjames #gaytalese #billcunningham #citibike
Thanks, Ron from Chicago! #TravelingAtTheSpeedOfBike
RIP, dear sir (1-year anniversary today). We r continuing your #GoodTrouble. #JohnLewis #GeorgiaStateCapitol #streetphotography
My last 2.5 weeks. Which coincided with the 1-year anniversary of surviving a #HitAndRun while #TravelingAtTheSpeedOfBike in the place I call home. This helped center #joy. #selfcare #rollerskate #RoadViolenceSurvivor #ThisIs57 #NotTodaySatan #LiveOutLoud
Today’s #LeapOfFaith. I still believe in #SlowDuckCrossing. I still believe in me.
Guess where I am?! #SlowDuckCrossing
Meet Daniel Eppstein, the latest story in an ongoing series of profiles of people making it more welcoming to ride bikes 🚲 and occupy #public space close to home and around the 🌎 🌍. See TravelingAtTheSpeedOfBike.com. @bicyclingmag @outsidemagazine @nytimes @wsj @guardian @bycs #bycs #bicyclemayor #TravelingAtTheSpeedOfBike
Nothing changes if we don’t change.
Practicing stopping (in more ways than one)
It was comin’ a toad-strangler today while I was #TravelingAtTheSpeedOfBike! Didn’t stop me from my daily #LeapOfFaith!
See TravelingAtTheSpeedOfBike.com and meet people making it more welcoming to ride #bikes and access #public space. I just added a bunch of links to bios of the amazing bike tour guides from @biketoursatl (which I was hired to write for their website). #bicyclemayor @bycs @peopleforbikes @bikeleague #bikeboom #TravelingAtTheSpeedOfBike 🚲❤️🤸‍♀️
Lol. I can only get better! (A year ago today I was contacting @peepslawyer after surviving a #hitandrun while #TravelingAtTheSpeedOfBike. Am grateful to be able to #rollerskate, and still ride my #bike, today.) #RoadViolenceSurvivor #ThisIs57
Now done. Movin’ on. #RoadViolenceSurvivor
If I interview u via phone/Slack/WhatsApp for TravelingAtTheSpeedOfBike.com (or when I get interviewed for podcasts, etc), it’s usually from here.
1st time skating at a skate park — and it’s one designed by #TonyHawk! 🤸‍♀️
Skates and bike match now ❤️🚲🤸‍♀️🎨
#public #peaches🍑 r almost ready, by the way