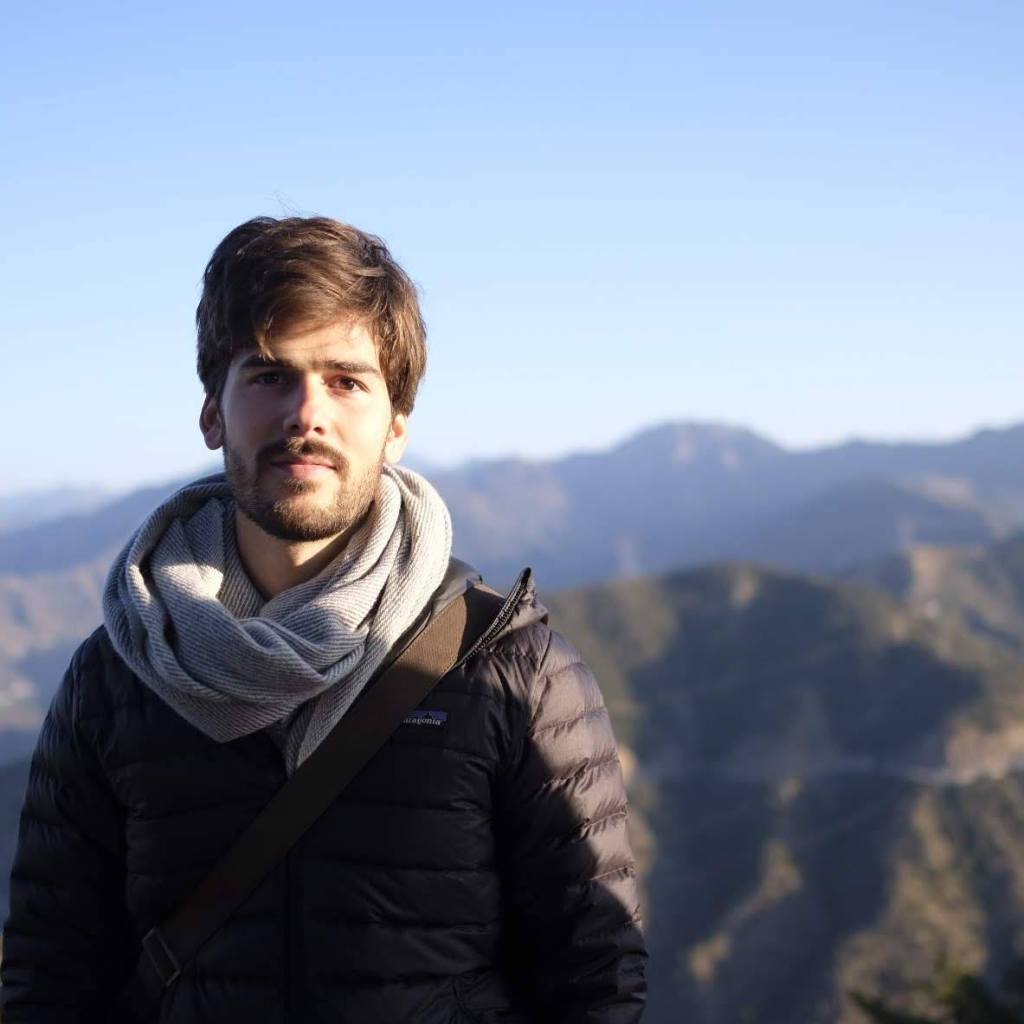 Meet Daniel Eppstein. He’s the Director of Operations for the Amsterdam-based social enterprise, BYCS, where I represent Metro Atlanta as part of a global consortium of bicycle mayors. He recently became our point of contact after our previous connection left.

Daniel sent a terrific intro email out to all 120 of us, and I asked him if I could interview him (after having discovered how easy that is to do internationally for free via Slack when I interviewed the four Canadian bicycle mayors during their National Bike Month in June). We had the opportunity to chat this week — he in the BYCS office in the Netherlands, me in the shadow of towering sunchokes and sorghum in the southeastern USA.

And, as usual with stories that involve bikes, it’s a love story! In fact, Daniel fell in love three significant times in this story, in a bit of a reverse Eat Pray Love adventure. Kick back and enjoy.

1. Heavily involved with his high school’s sports teams as well as its alternative crowd and bike culture, Daniel and his friends rode everywhere in bike-friendly Brookline, Massachusetts. It was when he rode his fixie bike to his restaurant job in Boston’s North End, however, that he became completely seduced by the freedom from Boston’s notorious traffic jams and the 25-minute (no matter what) predictability of his arrival time. In fact, he fell in love with it.

Always involved with the outdoors, college then took him to Colorado College (named #3 in innovation in the USA), where he majored in sociology and additionally focused on triple-bottom-line entrepreneurship.

2. And then here’s where the movie music really ramps up. Daniel moved to Amsterdam five years ago, with a budding romance (his next love story). After eight months or so, it was clear that wasn’t going to work out so they parted. But somehow Daniel felt like his story in Amsterdam wasn’t done. He waffled for a year or two, a time he describes as very dark.

“I felt rudderless. My safety and security dwindled significantly. I had lost my way,” he told me.

He needed to recalibrate, and chose to take some time to travel. A year, in fact.

Daniel thought Indonesia was the answer, but he discovered after being there awhile that it wasn’t. He felt he needed more of an inward journey.

3. And so he went to India, where he spent the rest of that year of discovery doing yoga, meditation, and deep questioning about his life. Ultimately, this is where he fell in love for that third time — with himself.

“I peeled back my layers and came back to a sense of ok-ness. I realigned with my values, and how I want to engage with the world,” Daniel said.

After a summer back in the USA, Daniel decided to return to Amsterdam and perhaps pursue a masters degree in urbanism. However, as luck or kismet or the alignment of the gods would have it, Daniel met someone who connected him with Lee Feldman, the founder of BYCS. Within two weeks of his arrival in November 2019, he got the job at BYCS and has since spent this entire pandemic living what he considers a sustainable life doing good work.

That work will only get better, according to Daniel. His job is to help people connect, collaborate, share knowledge, and execute projects, and he has big plans for how that will manifest itself in the coming year.

“We are moving BYCS increasingly from a for-profit model to a nonprofit model so that we can access the increasing number of active mobility grants and opportunities around the world, which our bicycle mayor network can then leverage in their local communities,” Daniel explained. ‘We are also hoping to increase impact measurement, articulation, and project reporting so that best practices among cities with similar challenges can be shared and replicated.”

Daniel sees his personal strength as being able to achieve this with pragmatism and efficiency.

“I’m optimistic,” he stated. “I’m not risk-adverse. I’ve always been a truth-seeker, wanting to know what is the juice of life, and figuring out how we engage.”

And now, finally, he feels at home — and in love with the life, and the world, he is building.

Meet the newest bicycle mayor in the world, and consider who would be a good fit representing your city as part of our global consortium as we ramp up for what’s sure to be the biggest, most impactful year yet for our collective bicycle mayor movement — thanks to people like Daniel (and perhaps even you).

As Metro Atlanta Bicycle Mayor, a League Cycling Instructor, a PeopleForBikes Ambassador, and the author of Traveling at the Speed of Bike (book and blog), I shine a light on people making it more welcoming to ride bikes and access public space close to home and around the world. Meet some below! If you’d like to put stories to work for your company, municipality, or organization, see here.

That’s a wrap on Week 1 (of a 6-week sabbatical to rethink things, and test some new ideas). Quit Facebook. Wrote zero blog posts (a miracle). Limited Twitter and Instagram (am trying to stay completely off, but cold turkey is hard, plus I had to call out egregious #greenwashing). Pitched 4 articles. Launched a serial release of a new book. Talked to people from #Costa Rica to #Tasmania. Helped connect some Metro #Atlanta folks re: #bicyclemayor stuff. Became a Beta-tester for two #activemobility services as a #TrustTheJourney #influencer. Had my weekly bocce game with hubby, and hung out with/helped my family. FYI, in the last 3 weeks, I have now #rollerskated at a school parking lot, a track, the top of a MARTA parking deck, a #TonyHawk-designed #skatepark, a multiuse trail, a cul de sac, my kitchen and foyer, a garage, and the mall parking lot.I have a LOT to say about my findings, but I’ll save that for another time! Hope to see u out there #TravelingAtTheSpeedOfBike!
Am on a 6-week sabbatical (until September 1). Rockin’ my #Plasket #bike basket (reclaimed ocean plastic), pitching articles, connecting with more #changeagents globally (this week included people in #Atlanta, #NewYork, #CostaRica, and #Tasmania), meeting new people #rollerskating, helping my family, and doing a listening tour in order to increase outcome efficiency this fall. Am also evaluating additional #activemobility, #sustainability, and #over50 #brandambassador requests. Hope to cross paths with you!
Look inside at TravelingAtTheSpeedOfBike.com/book #memoir #advocacy #leaguecyclinginstructor #cities #indie #author #bikeboom #bicyclingmagazine #nyt #wsj #oprahwinfrey #arnoldschwarzenegger #lebronjames #gaytalese #billcunningham #citibike
Thanks, Ron from Chicago! #TravelingAtTheSpeedOfBike
RIP, dear sir (1-year anniversary today). We r continuing your #GoodTrouble. #JohnLewis #GeorgiaStateCapitol #streetphotography
My last 2.5 weeks. Which coincided with the 1-year anniversary of surviving a #HitAndRun while #TravelingAtTheSpeedOfBike in the place I call home. This helped center #joy. #selfcare #rollerskate #RoadViolenceSurvivor #ThisIs57 #NotTodaySatan #LiveOutLoud
Today’s #LeapOfFaith. I still believe in #SlowDuckCrossing. I still believe in me.
Guess where I am?! #SlowDuckCrossing
Meet Daniel Eppstein, the latest story in an ongoing series of profiles of people making it more welcoming to ride bikes 🚲 and occupy #public space close to home and around the 🌎 🌍. See TravelingAtTheSpeedOfBike.com. @bicyclingmag @outsidemagazine @nytimes @wsj @guardian @bycs #bycs #bicyclemayor #TravelingAtTheSpeedOfBike
Nothing changes if we don’t change.
Practicing stopping (in more ways than one)
It was comin’ a toad-strangler today while I was #TravelingAtTheSpeedOfBike! Didn’t stop me from my daily #LeapOfFaith!
See TravelingAtTheSpeedOfBike.com and meet people making it more welcoming to ride #bikes and access #public space. I just added a bunch of links to bios of the amazing bike tour guides from @biketoursatl (which I was hired to write for their website). #bicyclemayor @bycs @peopleforbikes @bikeleague #bikeboom #TravelingAtTheSpeedOfBike 🚲❤️🤸‍♀️
Lol. I can only get better! (A year ago today I was contacting @peepslawyer after surviving a #hitandrun while #TravelingAtTheSpeedOfBike. Am grateful to be able to #rollerskate, and still ride my #bike, today.) #RoadViolenceSurvivor #ThisIs57
Now done. Movin’ on. #RoadViolenceSurvivor
If I interview u via phone/Slack/WhatsApp for TravelingAtTheSpeedOfBike.com (or when I get interviewed for podcasts, etc), it’s usually from here.
1st time skating at a skate park — and it’s one designed by #TonyHawk! 🤸‍♀️
Skates and bike match now ❤️🚲🤸‍♀️🎨
#public #peaches🍑 r almost ready, by the way