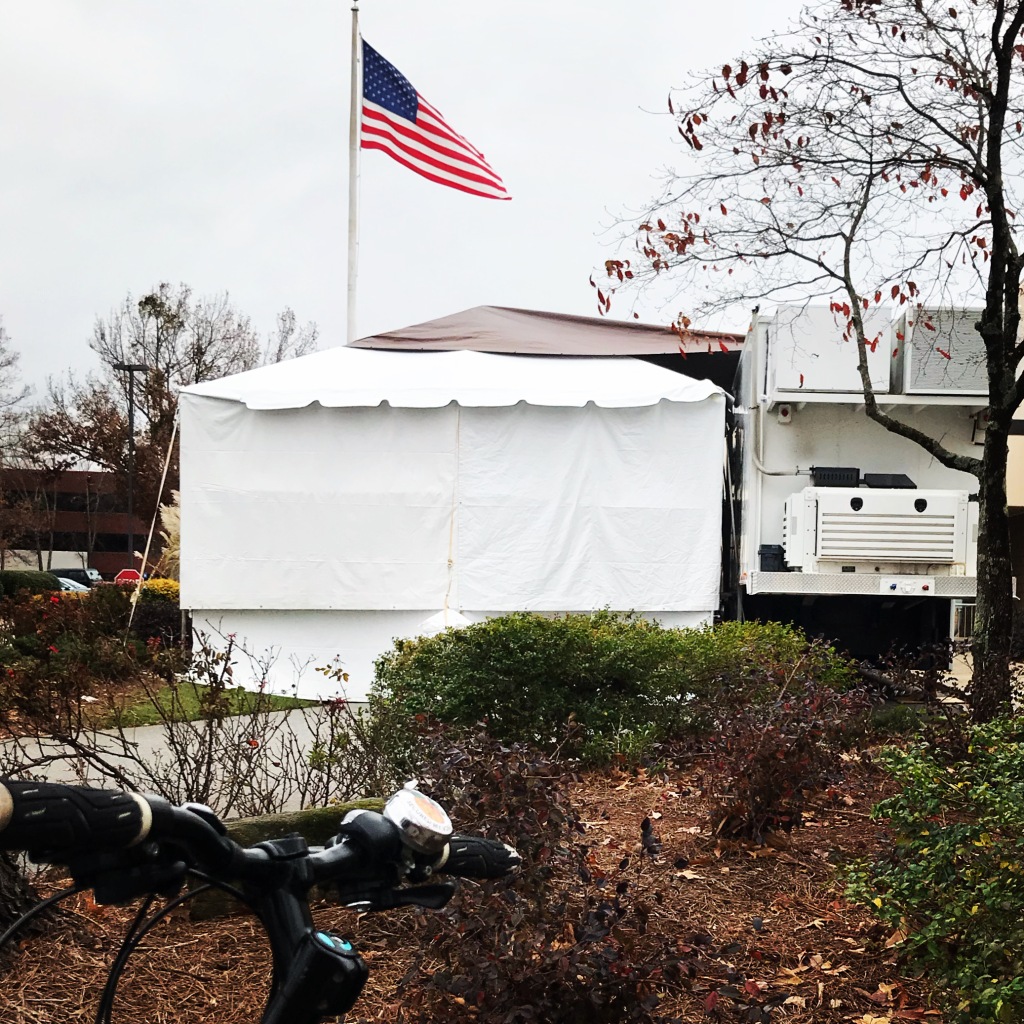 I was trying to take a break for the holidays to work on my new book, Slow Duck Crossing. However, because of what happened yesterday, I can’t stop bearing witness and supporting my fellow humans who are Traveling at the Speed of Bike. In the very Metro Atlanta suburb-city (Tucker) where my husband originally bought Attica for me 31 years ago when we got married, a driver, seemingly deliberately, hit a man and woman on a tandem bike — and did not stop.

They survived, and I reached out to them with a version of this message:

I am so, so sorry to hear about the assault on your lives yesterday. I survived a hit and run while riding my bike in Dunwoody on July 13. I hired Bruce Hagen of Bike Law for both criminal and civil cases, which just settled. If interested, see here. Please let me know if you would like to talk. It took me about a month of physical therapy to heal physically and much longer to overcome the trauma of it, although I still feel it and may always. Hugs to both of you. You are not alone.

Further scrolling through yesterday’s happenings reveals that there were at least two additional people on bikes hit by drivers of motor vehicles in the City of Atlanta yesterday — one at DeKalb Avenue and Moreland, and one at Jackson Street and Auburn Avenue (both places I ride frequently).

We are in the darkest days of the pandemic here in the USA. Hospital ICUs are full or almost full. The photo above is the refrigerated truck and loading ramp that, in tandem, form a portable morgue that I passed at a hospital on the border of the Metro Atlanta cities of Roswell and Alpharetta a few days ago while Traveling at the Speed of Bike while waiting for a loved one (where, by the way, it was a sh*t show to ride, and I did so illegally on the sidewalk, despite both of those cities having Bicycle Friendly Community designations).

Those of us who are riding bikes have begged and pleaded for safe access. I asked Dunwoody City Hall for temporary pop-up access during the first week of the lockdown in March (and volunteered to lead the effort) and was told a firm and fast no. You can see that post here.

My city continues to pretend it is bike friendly despite being turned down by the League of American Bicyclists for Bicycle Friendly Community designation this past week (as was the neighboring city of Peachtree Corners). No, a few bike rodeos and more police action (oh for god’s sake — have you not been listening this year?) are not the steps you need to take to achieve that goal.

Actually making the streets safe for people to ride bikes now — not next year, not in twenty years — is what’s needed. Yes, it’s possible. Other cities are doing it. If we truly wanted to be bike-friendly, we would be*. It’s actually that simple. (See Cone of SIlence.)

I took an 11-mile bike ride yesterday with that damn BikeNoodle (which I only use here) on a lovely Saturday afternoon to deposit my absentee ballot for the January 5th U.S. Senate runoff in the secure dropbox at City Hall.

While on my way to and from doing my civic duty, I felt moments of extreme danger (where I then went on the sidewalk, which is legal here but sometimes impossible because there are too many walkers, joggers, strollers, dogs, plus I have documented that it takes 40% longer due to social distancing requirements, heeding the right of way to walkers, and waiting for beg buttons). I also saw only one other bike rider (a middle aged white man in lycra) during that entire ride.

Every city has a path and pace. For instance, my neighboring city of Sandy Springs has not changed one thing on the road where a driver killed a man on a bike this past spring and a ghost bike was dedicated on May 30, 2020. (See Has Anything Changed?)

IF NO CHANGES HAVE BEEN MADE AFTER A MAN WAS KILLED, CAN I EXPECT THAT CHANGES WILL BE MADE AFTER I SURVIVED? AND IF EVEN DEATHS DON’T MATTER, WHAT ACTUALLY DOES?

As we enter a new year filled with hope for health and people trying to do what is proven to be the right thing, I wonder what Metro Atlanta city is going to finally say, “Now. It’s time.” Because you can, you know. See 7 Low-Hanging–Fruit Actions.

And more specifically, how can we work in tandem?

I’m not an armchair advocate. I am rubber-hits-the-road every single day. I offer my professional services, for free, to shine a light on positive stories (see Meet Greg Masterson. Meet Marjon Manitius. Meet Byron Rushing. Meet Creighton Bryan, plus, of course, the whole You Go, Girl! series for recent examples). I create and showcase free bike routes with everyone in mind, even in places where that hardly exists (hello, Norcross). As the first Metro Atlanta Bicycle Mayor (a pro bono, eight-hour-a-week position), I am now focusing county-by-county alphabetically starting with Cherokee County in January (hello, Mosquito Flats at Blankets Creek Trail — I’m comin’ for you). See the rest of the schedule here. Here are my three goals. See my rates for work beyond that here.

I AM INDEPENDENT OF ALL GROUPTHINK AND EXTERNAL PRESSURES. I WILL CONTINUE TO SHARE MY LIVED AND LEARNED EXPERIENCE HONESTLY.

We are at an inflection point. What we do next matters. I continue to take Leaps of Faith, and look forward to the day that’s not required just to ride a bike.

And now, I’m going back to my fiction for a little while, where I actually do have the power to create a new reality, right now, today.

* Do we actually want to be bike-friendly? I guess that is the central question. Bikes Are the New Toilet Paper led me to think more people were going to get involved, but that doesn’t seem to have happened, at least not here in Dunwoody. Joe, Kathleen, Paige, Jason, Anne, Dona, Bruce, Tom and a few other folks who have been doing the heavy lifting for years need your help. And city halls throughout Metro Atlanta need to stop misrepresenting existing “networks.” Your awards are not more important than our lives.

Atlanta, By Bike (and Why Metro Atlanta Leaders Are Invited)

The Width of a Prius

Click here for fun, functional, and even free gifts. All proceeds help more women and girls ride bikes — like all the women pictured below, plus Diana, and girls in the most diverse square mile in the USA. My next class is this Wednesday, with thanks to you!